I don't think I know anybody that came up playing jazz guitar (for a span of roughly 30 years) in New Orleans that didn't study with him. &#151Davy Mooney

Ensuring the continuity of the lessons and traditions from one generation to the next can be a delicate process. It often requires the care and sensitivities of someone with a unique balance of admirable qualities. With respect to the arts, it calls for someone who has both respect for the masters and an appreciation for the innovation of a new breed. It demands a thorough understanding of the traditional practices of old and enthusiasm for the evolution of the craft. It calls for the ability to convey the fragile balance between theory and inspiration. Perhaps most importantly, it requires a mentor who can introduce the lessons of the virtuoso and encourage talented youth to learn them as a foundation, yet achieving that end through infectious admiration and example rather than browbeating.

By all accounts, Hank Mackie possesses an abundance of all of those qualities.

Mackie was formerly the owner of The World of Strings, a small New Orleans guitar instruction studio in the area known as Lakeview for the better part of the latter quarter of the 20th century. At the end of a long dark hallway was an entrance that led to a narrow waiting area and 3 or 4 separate rooms no larger than your average master bedroom closet, a clandestine location reminiscent of a private detective's office from the film noir genre. It was there that Mackie and his colleagues displayed equal parts instruction, artistry, and patience for hundreds of aspiring musicians.

There are several influential artists who made substantial contributions to the advancement of jazz guitar from the Bebop era and beyond. One name seems to come up consistently, however, when guitarists who are grounded in the history of jazz discuss their influences—the man born Joseph Anthony Passalaqua and known as Joe Pass. His brilliance was integral in elevating jazz guitar to the level of featured showpiece, as Pass pioneered the ability to intertwine melody, chords, fill-in solo riffs, and bass lines, carrying tunes with or without the safety net of a combo. Hank Mackie, through instruction and performance, demonstrates the influence of the legend.

THE TEACHER CAN PLAY! 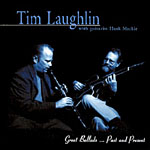 While listening recently to local clarinet virtuoso Tim Laughlin's Great Ballads... Past and Present, the 1999 album (one of six recordings on which the two collaborated) for which Mackie's guitar provided the sole accompaniment, I was reminded of how the late Mel Torme once described his relationship with pianist George Shearing. "Two people with one musical mind," said Torme. Mackie is perfectly in step with Laughlin throughout, the ideal complement—intertwining interesting textures with Laughlin's beautiful tones, yet never overbearing and respectful of the melody.

"Hank's playing is very much like his personality. He's very giving," Laughlin says, explaining why he sought to pursue Mackie to record the Ballads project, an album that was ambitious in its simplicity and can best be described as a musical conversation. "It was basically just about two instruments talking to each other and playing off one another," he added. "And I don't think anybody in town does it any better (than Mackie)."

"Another thing about Hank is his enthusiasm," he adds. "He's one of those (players) who's so secure with himself. When you hear him play, you understand why. If you put something in front of him, he's not going to feel strange about it because he's never played it. He'll be the first one to say, 'Let's do it or let's hear this.' That's sort of rare now."

At a young age, Laughlin first hired the elder Mackie to fill out his combo for a local hotel brunch gig that ran for several years, because he sought to tap into Hank's wealth of knowledge. "I had nothing to prove and everything to learn," says Laughlin. "He's very patient with his explanation and very clear. I learned a whole lot from him," adding emphasis to the latter sentence.

THE NEXT GENERATION
It will likely be Mackie's role in bridging the time continuum of jazz guitar from Joe Pass and others to the next generation of New Orleans guitar wizards, however, that may ultimately serve as his crowning achievement. And in this triumph are timeless lessons in effective education, both in the music realm and otherwise.

"If Hank took on a new student, he would ask the student what they were looking forward to learning, and it might be a lick from Whitesnake, or whatever," says Laughlin. "Hank would simply say let's hear it, he'd teach the kid the lick, and they'd start the lesson right after that. Rather than giving the kid a lecture, he did what the kid wanted and moved on."

I had the pleasure of speaking to a couple of Mackie's younger protégés recently. At the age of 25 and recently relocated to New York in the aftermath of Hurricane Katrina, Davy Mooney is still in the process of establishing himself in the jazz world, yet he's built a great foundation. He recently placed third in the prestigious Thelonius Monk guitar competition in Washington, D.C., which was judged by an impressive panel of guitar giants including Stanley Jordan, John Pizzarelli, Pat Martino, and Bill Frisell. His journey included instruction under Mackie, at the New Orleans Center for Creative Arts (NOCCA), and in the University of New Orleans (UNO) jazz guitar combo under the direction of one of Mackie's most accomplished students, Steve Masakowski—a music instruction "trifecta" that defines the consummate roadmap for jazz guitar supremacy in New Orleans.

THE "DE-MYSTIFICATION" OF JAZZ GUITAR 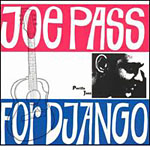 The first Virtuoso album (there were actually 4 separate albums and a live recording in the Virtuoso series) from Joe Pass is frequently referenced as the work that exemplifies how Joe Pass took jazz guitar to a new level. It's the album entitled, For Django, Joe's tribute to "gypsy jazz" master Django Reinhardt however, that Mackie passed to his promising students and that Mooney and others point to as the ultimate jazz guitar piece. "It's the definitive jazz guitar album. It's got everything," says Mooney.

In terms of Mackie's influence, he adds, "He can really break things down and get at the nuts and bolts of things. Jazz can be kind of mysterious. He just sort of demystified the whole thing. It's sort of like if you do what he says, you're going to sound good," says Mooney, echoing Laughlin's sentiments regarding Mackie's ability to simplify seemingly complex theories, a universal attribute of great educators.

On a more conceptual level, Mooney discussed Mackie's influence as well. "There are some guys that just kind of play a bunch of licks, like plug lick in here," says Mooney when describing the way Mackie discussed guitar players and their approach, "And other guys that play on a deeper level like Joe Pass and Tal Farlow." Mooney added that when Mackie discussed great players, he clearly conveyed to him that making that distinction was critical.

Mooney has released two CD's, 2002's In This Balance of Time, and the sequel one year later, Luckless Pedestrian. Both recordings showcased all original material, and he has his sights set on another CD of the same. Mooney also gained notoriety previously as a member of The Hot Club of New Orleans, a local band in the mold of the Reinhardt/Grappelli group of the late-30's that took France by storm. Todd Duke, another student of Mackie covered guitar duties in tandem with Mooney for the dynamic combo.

The affectionate manner in which Ted Ludwig speaks of Mackie's influence clearly demonstrates that Hank's guidance transcended music and affected him on a more personal level. Ludwig was the inaugural winner of the ASCAP/Louis Armstrong Foundation scholarship, which helped fund his graduate work at the University of New Orleans (UNO). He also provides guitar instruction for Mel Bay Publications. Ted is a native of St. Bernard parish which was devastated by Hurricane Katrina, and has relocated to Little Rock, AR, where he continues to play and teach frequently.

Ludwig sought Mackie for instruction in 1994 at the age of 20 at the suggestion of several musician friends. "Hank saved my life musically," says Ludwig. It was Mackie who persuaded Ted to stay in New Orleans and learn from the fraternity of young jazz guitarists that were feeding off each other's passion. "I knew I wanted to be a player, but I didn't know what direction to take. Hank helped me to clarify those things," he added.

Ludwig noted Joe Pass (and the aforementioned For Django album), Tal Farlow, Wes Montgomery, Barney Kessel, Howard Roberts, and Pat Martino as influences that Mackie offered for his audible consumption, a musical diet that redirected him from rock and fusion toward jazz. "When he let me hear Joe Pass playing on the John Lewis tune 'Django,' I couldn't believe it," says Ludwig, recalling a breakthrough moment that turned him on to jazz. "I just said Oh, my God, this is it. This is what it's about, right here." He added that Mackie had hundreds of solos transcribed from when he was a kid that he shared with him.

GETTING IN THE TRENCHES
"Hank was always a nuts and bolts (the exact term Mooney used) kind of a teacher. If you took what Hank gave you and took it to a job, it worked." Ludwig adds, "If I could sum it up with one sentence, he got in the trenches with the student," noting the propensity of some teachers to demonstrate a condescending attitude toward students. "He didn't sit up there on a higher level, look down at you and say OK, this is the thing you need to learn to get up here. He came down to your level and he brought you up. A lot of teachers shoot things at you—If you get it, you get it, if you don't, you don't," he added.

"Hank never was afraid to tell you things more than one time," says Ludwig. "When Hank was teaching, he let go of the fact that he was a great player. Hank always encouraged his better students to come out and sit in wherever he was playing," he added, offering further evidence of Mackie's self-assuredness and humility.

Ludwig also discussed Mackie's approach to assessing his students and providing a customized lesson plan. "Another thing that was truly amazing about Hank—All you had to do was play one song and he could find all of your weaknesses," said Ludwig. "He didn't just have a set curriculum that everybody worked on. He knew that every individual had strengths and weaknesses. He had a plan in mind to get you from point A to point B."

Mooney, Ludwig, and Duke need only look at the brilliance of the Mackie disciples that have gone before them to get a sense of the solidity of their foundation.