BY DAVID MCLEAN
September 19, 2009
Sign in to view read count 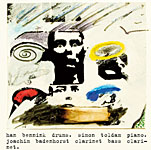 One of the most iconic players from the European free-music scene, Han Bennink's 50 plus year career has seen the Dutch master drummer traverse through a multitude of musical settings. Bennink's journey has embraced revolutionary, avant-jazz recordings such as saxophonist Peter Brötzmann's ferocious Machine Gun (FMP, 1968) and accompanying reed player Eric Dolphy on his final recording, Last Date (Verve, 1964), to providing the backbone of reed player Anthony Braxton's revisionist project around saxophonist Charlie Parker and a long and fruitful partnership with Dutch pianist Misha Mengelberg.

Far from limiting himself to exclusively practicing his art within the confines of the jazz world, some of Bennink's later collaborations have included artists as disparate as anarchic punks The Ex and an appearance on Spring Heel Jack's future jazz/jungle experimentation Amassed (Thirsty Ear, 2002). In each instance, Bennink has played with as much dazzling technical ability as absurdist wit, from subtle percussive colorations to evoking the sounds of an avalanche, and on occasion using anything within grasp (or mostly not!); be it his own shoe or a piece of discarded fruit. His ability to flexibly integrate in each chosen musical setting has made him a choice collaborator for literally hundreds of artists. And it is this flexibility that is displayed on Parken, surprisingly the drummer's first group-led outing, a trio rounded out by pianist Simon Toldman and clarinettist Joachim Badenhorst. Containing a mixture of traditional jazz ballads, abstract improvisations and the occasional blast of free-jazz carnage, Bennink's debut as leader is a diverse as his musical background, offering a degree of accessibility arguably absent on many recordings by the Bennink's contemporaries.

The majority of the improvised material on Parken is characterised by a mood of curious introspection and, perhaps, emotional detachment. Pieces such as "Music for Camping" and "Reedeater," amongst others, clarify the group's ability to really search out sound and travel through a broad range of musical terrain, turning and shaping each tonal collection with patience and delicacy. Toldman and Badenhorst are emphatic collaborators, and Bennink leaves enough space for both the young Europeans to shine, as each member of the trio is given the opportunity to direct and shape the music with varying subtlety and strength.

"Myckewelk," however, proves that Bennink has lost none of the fire that made him one of the most requested percussionists in the free music scene. This piece is volcanic, an all out assault on the sensory: Bennink yelping in unison with snare hits and cymbal smashes that destroy any of the contemplative space heard elsewhere on the album. Toldman stabs at the keys with varying degrees of aggression, forming tonal clusters as sharp and cold as icicles as Badenhorst screams through his clarinet with some of the most ferocious over-blowing heard this side of Brotzmann. The group at various instances has the ability to flare up some of the more inward looking aspects of its collective sound, providing a tension that charges each track on the album.

These examples show only one aspect of a multi-faceted record, all of which are tactfully interspersed with the more song based material. Duke Ellington's classic "Lady of Lavender Mist," is played with obvious love; warm piano chords and a gentle clarinet sketch are left to breath as Bennink dips in and out of subtle cymbal work and a more forceful shuffle. The title track is perhaps the most surprising piece on the album, a melancholic piano dirge with achingly beautiful female vocals tastefully framed by the trio with a hypnotic repetition that lulls to its conclusion like a whispered lullaby; it is a unique closer to a very interesting record.

Parken's combination of composition and abstraction is what makes it such a rewarding listen. The juxtaposition of these approaches, rather than cancelling each other out, strengthens the impact of each track on the record. It is an album that perfectly embodies its leader's multidisciplinary skills, exhibited by his discography, and is played with restraint and recklessness and an interaction that at points borders on telepathy. A rewarding listen that is only encouraged by its accessibility, and a valuable entry into this unique musician's oeuvre.