By Doug Collette
June 22, 2020
Sign in to view read count
Gordon Grdina continues his singular and prolific career path with not one but two different recordings conducted with two separate musical ensembles. Accurate and vivid reflections of his eclectic mix of what is, in simplest terms, mainstream jazz, free/improv and Arabic music. Nomad Trio and Resist also build upon his background as protégé of jazz great Gary Peacock: Grdina has become a well-respected contributor to both the jazz and world music realms. For a point of comparison, the music on these two releases is at once haunting and comforting, mesmerizing and intoxicating, ultimately luring in a listener to experience musicianship as involved as it is ingenious. As a result, the records offer exposure to familiar strains as often as not set in stark relief against unconventional textures, the novel contrast of which may likely spur the music-loving listener to delve further into the utilization of all these instruments, as utilized with such panache by the gifted participating musicians. 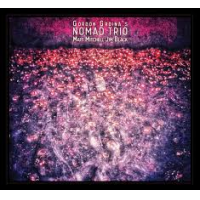 Gordon Grdina's Nomad Trio is enthralling as it probes assertively through arrangements for the leader's oud and guitar, Matt Mitchell's piano and Jim Black's drums. The provocative playing highlights the differences in texture of the instruments and, in so doing, the group is able to meld a composite of those differing densely-woven timbres in such a way the absence of space becomes a virtue. This closely-knit interplay is a wonder to behold and even if it takes repeated listens to fully appreciate its generally abstract nature, the rewards multiply each time. Every successive pass is also worthwhile in part because the palpable hint of a narrative arises from the dramatic sequence of the half-dozen tracks, despite the absence of any content enclosed or in the CD artwork to that end; the Nomad Trio is telling a story here and its musicianship, as well as the recording and mixing of John Raham combined with Chris Gestrin's mastering, effectively places the listener right in the middle of the action.

While the title Resist certainly has inevitable political overtones, the word also refers to the artistic leadership involved in bringing a diverse range of players together to create beauty for beauty's sake: Grdina's self-production maintains the focus even as it complements his playing. The electric guitar is hardly as exotic an instrument as the oud, particularly in the context of a group that also features violin, viola, cello as well as Jon Irabagon's saxophone (plus Kenton Loewen's drums), but each has its place in this forward-thinking suite of material. Individually, the multiple musicians have an unerring sense of direction and purpose, virtues heightened by empathy and that indispensable trait involving constant awareness of the surroundings, at any given moment. This is a virtual ballet in sound where a tangible sense of action becomes increasingly accentuated through the sonics mixed by John Raham, then mastered by Graemme Brown. The seven-person interplay has its structure to be sure, but the fluidity remains throughout this near fifty minutes, stately, portentous and joyous.