By Jeff Stockton
September 5, 2008
Sign in to view read count 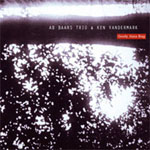 Ab Baars is a major figure in the Dutch jazz scene, having played with Misha Mengelberg and Han Bennink in their Instant Composers Pool for more than 25 years. Ken Vandermark has been the driving organizational force behind the fertile jazz community of Chicago for the better part of the last two decades, leading any number of bands and bringing together improvisers in the City of Wind with like-minded players throughout Europe and Scandinavia.

So in spite of Baars being ten years older than his American partner, this pairing is as comfortable as a reunion of grade school classmates. Recorded live at Amsterdam's Bimhuis at tour's end, Goofy June Bug finds both men splitting their time between tenor saxophone and clarinet (backed by Baars' regular rhythm section of Wilbert de Joode and Martin van Duynhoven) and both honor each other's musical traditions: Baars' compositions are as likely to carry a '60s free jazz influence as Vandermark's are to contain European classical elements.

Baars' Stravinsky-inspired "Straws" puts him on clarinet while Vandermark whispers so softly on tenor it only sounds like the black horn. Vandermark's "Memory Moves Forward" takes the volume down yet another notch, as he switches to clarinet and Baars brings out a shakuhachi (Japanese wood flute). Meanwhile, "Waltz Four Monk" finds the pair trying to out-gruff each other over a crooked staggering beat and the interplay on "Then He Whirled About" is downright bruising. This symbiotic doppleganging, however, is best embodied by the title track. Written by Baars, Vandermark turns it into one of his own as he spins characteristically repeated riffs that unfurl into rough-hewn solos, the Dutchman commenting in the background like a proud older brother.