BY GLENN ASTARITA
February 19, 2015
Sign in to view read count 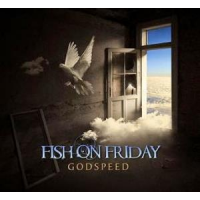 Fish on Friday is a highly focused multinational progressive rock band and not necessarily alluding to a Friday fish fry during the Christian observances of Lent. You won't detect any filler material on this meticulously produced album, spanning alternative, Indie and progressive rock via soothing vocals and engaging harmonic content. Occasionally, the musicians instill memories of Britain's fabled Canterbury prog rock scene as several comps are designed with asymmetrical doses of chutzpah and majestic choruses amid tender synth overlays and vastly melodic thematic constructions.

Many of these works are framed on medium tempo prog rock overtures, enamored by the vocalists' hush toned vocals that at times, are mixed a little below the instrumentation, providing depth and mystical qualities. Otherwise "Callin' Planet Home," ignite recollections of Pink Floyd's Dark Side of the Moon era vocal choruses atop a wall of sound. Yet the ensemble changes the pulse, also featuring Townsend's rangy, extended note solo spot that mirrors Floyd guitarist David Gilmore's resonating lead lines.

Most if not all of these pieces would seemingly enjoy gobs of radio airplay, but "Radio" contains palpable pop-rock sensibilities thanks to an endearing and catchy hook, complete with textural keys, alternating cadences and a counterbalancing synth and organ part. In other regions of sound, the musicians meld stately motifs with sanguine acoustic-electric treatments, ethereal backdrops, prismatic ostinato grooves and solid backbeats. Therefore, Godspeed is a rousing success, boosted by a multifaceted production, devised on strong compositions that radiantly morph grace, power and blissful therapeutic attributes into an unassailable sense of fulfillment.

About Fish On Friday