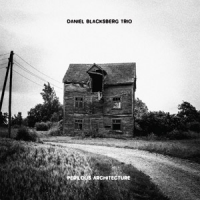 Philly-based Dan Blacksberg may not be well known (though he is a founding member of Anthony Braxton's Tri-Centric Orchestra). But on the evidence of Perilous Architecture, a limited edition LP which constitutes the second release by his trio, that won't be the case for long. While not novel, trombone lead outfits remain far from everyday occurrences. All three members work as a balanced unit, equally poised between the interpreting the leader's charts and extemporization casually rooted in that thematic material. Matt Engle's bass and Mike Szekely's drums still conjure rhythmic impulse, but stand as loosely tethered as you can get in such roles. They revel in spacious but restrained interplay.

Blacksberg moves adroitly between tonal color and lyric brassy exhortation. He makes sparing but effective use of multiphonics, and boasts a burnished tone in the higher register. The tension and contrast between his graceful trombone and the nimble bass comprises a key part of this session's appeal. Engle fully exploits the leeway he's allowed for contrapuntal dialogue and timbral invention, especially when he deploys deep resonant bowing, which adds both shade and highlight. Szekely is supportive and conversational, engendering a tumbling momentum. His cymbal splashes engagingly offset the inherently dark lows of bass and trombone.

Blacksberg furnishes the group with simple themes which seamlessly initiate purposeful explorations in almost freeform style. "ABC of Circling Bodies" gets the program off to a great start, as Blacksberg's grainy trombone intersperses a buzzy growl between the melodic ruminations, before some transparent but powerful threeway interaction. There is an unhurried "just found" quality to the set, attractively characterized by the high thin scratchy bass work over rumbling drums and murmuring trombone which emerges to end the piece.

Those same characteristics manifest themselves throughout, whether in the measured "Filament And Void," the fast chunter of "Roar Of Mankind" or the sprightly ditty opening "Blind Tracery." However "Scapegrace" forms the high point as a rolling vamp is continually interrupted by short swirling interludes, leading to boppish articulation and exchanges between emphatic bass and garrulous trombone over busy drums.