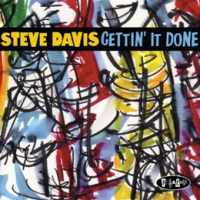 Calling trombonist Steve Davis a veteran is probably inappropriate—after all, he was a mere 44 year-old when he recorded Gettin' It Done in October, 2011. However, he has such a wealth of experience, such a command of his instrument and such a rich back catalog of recordings that based on his body of work rather than his birthday such a soubriquet is not so out of place. Gettin' It Done is a worthy addition to the Davis discography: a swinging, beautifully performed and exceptionally well-recorded sextet outing.

The album contains two covers, both classic tunes, given a fresh and vibrant sound by the sextet. John Coltrane's "Village Blues" opens the album as the band sets the scene with a passionate and coolly swinging performance that ups the tempo compared to the Coltrane Jazz (Atlantic, 1961) original—which, coincidentally, features bassist Steve Davis. There's also a take on Bobby Hebb's "Sunny" that showcases both Davis' warm, rich tone and Josh Bruneau's bright, brassy sound.

Davis' own compositions range from the smooth swing of "Steppin' Easy" to the punchy and up-tempo "Gettin' It Done." As might be expected from a player who was mentored by the great Curtis Fuller and who's collaborated with Jackie McLean and Art Blakey, among many others, Davis writes a mean hard bop number. As the gentle, late-night groove of "Alike" shows, he can also write a romantic ballad, and his performance on the tune also demonstrates the more romantic and considered side of his playing.

Alto saxophonist and fellow Posi-Tone artist Mike DiRubbo is the only sextet member to have joined Davis on his previous album, Images—The Hartford Suite (Posi-Tone, 2010), although pianist Larry Willis and bassist Nat Reeves have a long history of collaborations with Davis. The sextet impresses on every track, a dynamic and intuitive ensemble that offers sympathetic support to the solos and proves itself eminently capable of laying down whatever Davis asks of it—a tight, funky, groove ("The Beacon"), a sultry swing ("Wishes") or straight-ahead mid-tempo drive ("Longview") are all delivered with style.

The music on Gettin' It Done is the creation of a band that does much more than simply getting things done. Davis and his fellow musicians play with flair and an enthusiasm for the music that bursts out of the speakers. This is one of Davis' most impressive albums—and one of the most enjoyable straight-ahead albums of 2012.