By David Adler
December 6, 2005
Sign in to view read count
With a string of recordings for Fresh Sound and Steeplechase, George Colligan established himself as one of the strongest new pianists in jazz. His first Criss Cross outing, Ultimatum (2002), focused exclusively on original material. 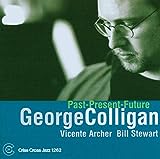 On the followup, Past-Present-Future, only the title track is original—and a memorable one at that. The slant toward covers is atypical for Colligan (save for 2000's Stomping Ground), but it confirms his ability to make personal statements via standards and not-so-standards. Bassist Vicente Archer and drummer Bill Stewart are new to the Colligan discography but complement one another and know how to stir up trouble.

The album begins with an unusual non-ballad treatment of "Sophisticated Lady and concludes with a full-tilt "Invitation. Colligan also reads "East of the Sun in a bright but easygoing 5/4, offers a brief and unaccompanied "Body and Soul, romps jubilantly through the Japanese folk song "Akatumbo and rhapsodizes on "This Nearly Was Mine (one of the best items in the Rodgers & Hammerstein library). His up-tempo arrangement of "Holiday for Strings refers momentarily to Coltrane's "Countdown and his "Three Views of a Secret, for solo piano, brings out the gospel tinge in this Jaco Pastorius classic—something I'd never quite noticed before. Catch too the glimmer of Ellingtonia at the start of the B section. Ballad-wise, Colligan does a lovely job with "Cinema Paradiso, the movie theme by Morricone, which Charlie Haden and Pat Metheny recorded on Beyond the Missouri Sky. 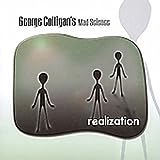 Colligan's Mad Science is very different: an organ-fusion group with a funky and modernist edge. Realization is its second outing. The first featured Gary Thomas on tenor and flute but this one is purely trio, with Tom Guarna on guitar, Rodney Holmes on drums and Colligan adding synthesizers to the mix. Guarna summons a far wider array of distorted sounds than on the previous disc. His solo on "Utopian Struggle is crushing. Fans of nastier tracks like "Grounded and "Oblivion might not take to the lush pads of the title cut or the stereotypically fusiony synth tones on "Human Need. But Colligan has a genuine talent for textures—don't miss the bass clarinet-like sound on "Snidely Whiplash and the faux arco cello of "Muse. This is a strong batch of compositions and the band, driven by Holmes' refined and responsive drumming, couldn't be tighter.

Tracks: Sophisticated Lady; Akatumbo; East of the Sun; This Nearly Was Mine; Past Present Future; Three Views of a Secret; Cinema Paradiso; Holiday for Strings; Body and Soul; Invitation.