BY MARK CORROTO
December 30, 2013
Sign in to view read count 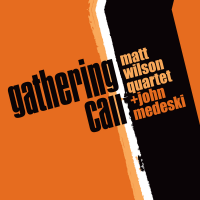 When he is not occupying the drum chair of one of dozens of bands that he is called upon to inject with his contagious effervescence, drummer Matt Wilson can be found leading his two bands, Arts & Crafts and the Matt Wilson Quartet. Both quartets feature stellar bassists, Arts & Crafts—Martin Wind and here, Chris Lightcap. Where the former employs the talents of pianist/organist Gary Versace, the Quartet sails without keys. That is, until Wilson invites John Medeski as a guest for the Quartet's fourth release.

Back in the day (the 1980s), Wilson and Medeski played in Boston's infamous Either/Orchestra, before the pianist formed the groove-happy improved band Medeski, Martin & Wood and Wilson became the in demand drummer for the likes of Lee Konitz, Dewey Redman, John Scofield, and Joe Lovano, to name just a few.

Of the thirteen tracks, only six are Wilson originals. The drummer chose some lost gems by Duke Ellington—"Main Stem" and "You Dirty Dog," seemingly, in an attempt to play stump the contestant in a blindfold test. Medeski shows his trad-piano chops and Lederer sheds the Ayler-esque licks for more of those by Paul Gonzales. They mine a Blue Note Records' bluesy hard bop sound with Hugh Lawson's "Get Over, Get Off And Get On," a minor hit for Yusef Lateef in 1969. Medeski morphs from Duke to Horace Silver, to an ECM sound heard on the meditative Wilson's "Dancing Waters" and Butch Warren's "Barack Obama."

This version of Wilson's Quartet draws on the band's multifaceted talents. Knuffke can deliver the most expressive breathy notes or punch skittering passages alongside Lederer's urbane horn; he draws from his love of both trad-jazz and the avant- garde. The saxophonist unleashes a release-the-hounds tenor call on Charlie Rouse's "Pumpkin's Delight" and an unvarnished soprano sound on "How Ya Going?."

Less we forget, all this tumult is organized and arranged by Wilson, who can swing something as simple as a finger-snap, heard on Beyoncé's "If I Were A Boy."