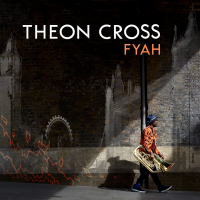 Over the last two years years the disruptive slice of the London jazz scene has produced an abundance of four-going-on-five-star albums, but even among such company Fyah stands out. Performed by a tuba, tenor saxophone and drums trio, augmented on two tracks, it is a work of majestic proportions, the embodiment of the neoteric London sound. Hear it and believe.

Fyah is the first long-form own-name release by London tuba player Theon Cross, a member of saxophonist and clarinetist Shabaka Hutchings' Sons of Kemet, whose third album, Your Queen Is A Reptile (Impulse!, 2018), is itself a jewel of Koh-i-Noor proportions in London's guerilla-jazz crown. The other members of the trio are fellow scene-stars saxophonist Nubya Garcia and drummer Moses Boyd. Boyd is co-leader of the semi-free duo Binker and Moses with saxophonist Binker Golding, now three albums into a ferocious winning streak, and an in-demand producer. Garcia is the tenor player with several acclaimed line-ups including her own band and the spiritual-jazz septet Maisha. Her follow-up to the dazzling Nubya's 5ive (Jazz re-freshed, 2017), whose band included Boyd and had Cross guesting on two tracks, is scheduled for release later this year.

From the startling low-end rumble of the first moments of opening track "Activate," your instinct tells you Fyah is going to be the coyote's cojones, and your instinct is right. Gritty, passionate and irresistibly danceable, the music romps on until the album ends 45 minutes later. The penultimate track, "CIYA," which features guests Wayne Francis on tenor saxophone, Artie Zaitz on electric guitar and Cross' brother Nathaniel on trombone, administers 8:25 minutes of honeyed recuperation before the final climax, the appropriately titled "LDN's Burning."

Francis, by the way, under the aka Ahnanse, is the guiding spirit of south London's Steam Down collective, whose Wednesday night events at Buster Mantis, a bar, eatery and performance space spread over two railway arches underneath Deptford rail station, are hotspots of London's new live-jazz circuit. Among much else, Steam Down is taking jazz back to its origins as dance music. Cross is a member of the organising collective.

After decades in the shadow of its American parent, British jazz is finally coming of age. Jazz was created by black musicians. The new London scene is by no means racially exclusive, but there is no doubt that it is black musicians who are once more leading the way. Bands such as Cross' are forging a rebooted style which reflects both the Caribbean and African musical heritages of the majority of its vanguard players and also such locally created styles as grime and garage. Their innovations have attracted an enthusiastic young audience who would not otherwise be interested in jazz. It is freeing the music from the dead hand of establishment gate-keepers and the poisoned chalice of tick-box funding bodies and bringing it back to the people. Right now, the new scene exists in a parallel universe to that of the established jazz world, but it is shaking the walls. Nothing like this has happened in London before. The closest comparison is with the jazz-dance movement of the 1980s. But that was on a far smaller scale.

In an interview with London's Jocks&Nerds magazine, to be published next month, Cross talks about the genesis of the new London scene. Here is an advance extract....

"Around the end of the 2000s a lot of us were hitting our twenties and we consciously started including the musics we'd grown up with in our jazz," says Cross. "I respect the jazz tradition, and it feeds into the way I improvise. But when I formed [the trio] I started thinking, what if I use some dancehall rhythms? Because that was the music I grew up around. My father's Jamaican, my mother's Saint Lucian. We all started bringing into the music those things that formed our identity as black British people. For Moses it was garage influences. Nubya the same.

It must have been fun being on 52nd Street in the mid 1940s during the birth of bop. But no more fun, surely, than being a jazz fan in London in 2019.