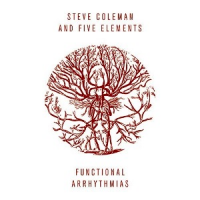 Ever the thinker, saxophonist Steve Coleman now delves into the connection between human biology and music with Functional Arrhythmias, perhaps his most accessible release in recent memory. With a vast discography that has covered everything from unadulterated funk in 1988's Sine Die (Pegasus) to advanced concepts in 2011's The Mancy of Sound (Pi), his curiosity and influence continue to expand.

Coleman reenlists the kinetic rhythm-section of Anthony Tidd (electric bass) and Sean Rickman (drums) who appeared on The Sonic Language of Myth ((RCA Victor, 1999). The two provide a groove center throughout the set as Coleman and young trumpet star Jonathan Finlayson provide the leads and tight vamps in the funky opener "Sinews" and the fragmented cooker "Snap-sis." Add to the mix guitarist Miles Okazaki, who's proven to be another intrepid artist as he adds color and texture in the intriguing Henry Threadgill-esque contrapuntalism on "Lymph Swag (Dance of the Leukocytes)."

Like other perceptive bandleaders, the caliber of these younger musicians speaks of Coleman's listening abilities. Tidd's electric bass is supple yet pronounced with nuanced punctuations and Rickman's multicolored traps dance with accuracy and nuance. The connection between Coleman and Finlayson is superb, the saxophone's alto countering and engaging the young trumpeter's lyricism. Coleman's heady compositions have, at times, diminished the fact that he's an excellent saxophonist, as evinced in "Cerebellum Lean"'s swaying groove or the tender balladry in "Respiratory Flow."

The intriguing title refers "to the irrational rhythms found in healthy human heartbeat patterns and many of its compositions utilize the heartbeat pulse," with Coleman crediting drummer/percussionist Milford Graves for providing inspiration for his pioneering research on the subject matter. At the end of the day, though, it is about the music, and this release provides stimulation for both the mind and body.