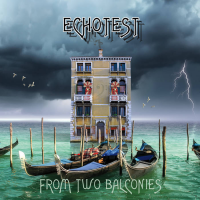 When is a bass duo not a bass duo? For Julie Slick and Marco Machera, the general answer is "whenever we want." Technically they're both electric bassists foremost, but that's far from the only tool in their box. The bottom end was prominent when they first joined forces on Fourth Dementia (self-produced, 2014), but already there was a noticeable emphasis on bending their strings to make guitar and synth sounds too. When they adopted the band name EchoTest with Le Fil Rouge (self-produced, 2015), the mix included more guests and vocals (and guest vocals). With From Two Balconies the duo has wandered even farther away from their instrumental/experimental roots and into mainly song-based territory, while drafting almost a dozen friends to make their strange brew of arty progressive-industrial-space-rock more expansive than ever.

The indirect influence of old-school prog comes through in spots; the words have a vague dramatic story theme and the Peter Gabriel-ish headdresses on those cover figures might not be a complete coincidence. Nonetheless, the electronic sound-sculpting and punchy production leave no doubt just which century we're living in. Touches of Pink Floyd, electric Miles Davis and Nine Inch Nails all come out of the blender sounding lively and fresh, and the band's hearty go-for-it attitude keeps the patchwork quality feeling like an asset more than a flaw.

Slick has sonic weirdness in her DNA—both a cause and effect of a decade holding her own alongside Adrian Belew—and the band's taste for effects gives an especially powerful jolt with the noisy thrakking of "Confirmation Bias" or the oddball surf-punk-meets-Krautrock chant "Radio Sayonara." Machera's crooning is respectively awed and paranoid in his couple vocal spots, while he's happy to turn the mike over to Claire Wadsworth when it's time for a haunting filtered ballad instead. Mike Visser's gritty delivery, meanwhile, is much better suited to "The Plights"'s edgy abrasive strings and the hard-drivingly catchy "Rack+Ruin."

Instrumental pieces are in the minority this time, though they're no less evocative. "Beats in the Brain" makes a great showcase for Pat Mastelotto's drum grooves amidst enough wailing echoes to live up to the group's name; the extended improvisational flow of "Reflect/ Reflex" goes from synth-y space battle to jungle drums before the album fades to a close. It all fits in the progressive-rock world while ambitiously staking out places the genre might go next. With their most energized outing to date, EchoTest remains an inspired outfit crazy enough to try anything and clever enough to make it work.