JKA Quintet: From the Nocturnal Chironian 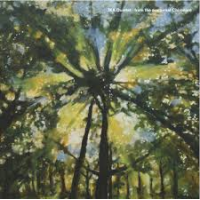 A long-lost poem written as a teenager, a series of evocative dreams, and the interpenetration of astrology, Greek mythology and Jungian archetypal psychology form the conceptual framework for From the Nocturnal Chironian by Danish bassist and composer Jens Kristian Andersen. The music on From the Nocturnal Chironian is only one aspect of its physical manifestation. The CD booklet (and, I imagine, the gatefold sleeve of the LP version) features the artwork of Rithva Landler, a painter whose aim was to—as Andersen's notes put it—"illustrate and accompany the music." For all of its otherworldly inspiration, the music on this charming album is not quite what one might expect. Sure, the instrumentation is pretty unique; featuring a front line of trumpet, bass clarinet, and cello. But the overall feel of Andersen's pieces, and the ensemble's sound, are much closer to the avant-leaning post-bop of Herbie Nichols, Dave Douglas and Henry Threadgill than, say, any given ECM album. In its merging of jazz and chamber music, some of Andersen's writing and arranging has an almost Duke Ellington-like feel to it. If one is looking for a classic "euro-jazz" or post-fusion sound, one best look elsewhere.

That said, the opening section of the album's first track, "Prelude to a Birth" has that classic Nordic longing sound. This dissipates about halfway through the piece, though, as the rhythm section initiates a relaxed, strolling swing for the first of many eloquent bass clarinet solos by Anders Banke. A member of Pierre Dorge's New Jungle Orchestra, Banke is a fluid and resourceful improviser who tends to prefer upper registers of the bass clarinet, giving the listener a little jolt whenever he dips down low.

Trumpeter Erik Kimestad, the youngest member of the group, has a bright singing tone which might bring Dave Douglas to mind. His acrobatic, impulsive soloing provides contrast to Banke's more thoughtful approach. Drummer Thomas Præstegaard, best known for his work with veteran reedman Jesper Zeuthen, has an understated "classic jazz" touch rather like Billy Higgins or Jimmy Cobb. In this age when drummers are almost required to bludgeon the listener with chops, Præstegaard's music-first approach is quite refreshing. His fills on "The Wounded Healer" are a case in point.

Soma Alpass' cello is largely, but not completely, responsible for the music's similarity to Threadgill's 80s and 90s "Sextett" recordings with Diedre Murray. Like Murray, Alpass alternately joins the trumpet and bass clarinet in the front line, or plays a contrapuntal melody which relates either to the bass line or to the horns. Her presence is key, fleshing the ensemble sound out in a very unique way. Unlike the rest of Andersen's eminently capable band, her musical background is largely in the worlds of classical and indie rock music.

Andersen, himself, seems a bit of an unknown quantity. Not unusual, perhaps, for a young European jazz musician staking out his (or her) musical territory for the first time. However, his copious liner notes—and most importantly his music—make it abundantly clear that he has something unique and new to say. As a soloist, he's actually somewhat reluctant; his improvisations on "The Mediator" and "Chariklo" are characteristically melodic and concise. His composing, however, is truly distinctive, and that's what From the Nocturnal Chironian is really all about. A couple of his pieces, notably "The Wounded Healer" and "The Mediator," reference classic bebop and post-bop tunes in various subtle and crafty ways. "Chariklo" is a gorgeous yet rather simple tune that uses a repetitive, lilting melodic motif as a jumping-off point. Tough, no-holds-barred swing is the prime directive on "Puerperal Psychosis." The Threadgill influence, which seems to permeate the entire album at a low level, really comes to the fore on the album's two final tracks "Prometheus the Awakener" and "Centaurus." The construction of both pieces is based on the intertwining of three distinct-but-related melodic motifs for cello, trumpet and reeds. The hurtling, forward-leaning drive of "Prometheus" dissolves into the balladic "Centaurus" which seems a fitting endpoint for a remarkable musical journey.

Several of Andersen's pieces are multi-sectioned, but remarkably un-fussy. Perhaps the most "out there" track on the album, "War and Archery" moves from brooding chamber jazz to interactive group improvisation to a churning, rhythmic 7/4 motif punctuated by Præstegaard on-point rimshots. "Shaman (of the Skies)" darts from a convoluted hard-bop-derived head, through a brief bass-trumpet dialogue, to a free-ish trio improvisation with Præstegaard. Banke and Alpass jump in and the cellist immediately sets the stage for Banke's more "changes" oriented solo. Interestingly, Alpass' role here is key, though she only plays for a few seconds. Chalk it up to the sort of telepathy that typifies great music and great musicians.

From the Nocturnal Chironian is literally chock full of inspired, memorable music-making. The fact that it's from Europe and by a bunch of new and unfamiliar musicians doesn't matter. This is important and vital music.