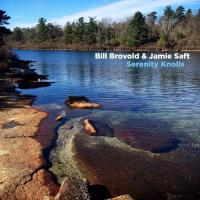 It's a shame to say it, but even the most open-minded souls have a tendency to classify and ghettoize musical artists. This is the type of album that reminds us all that you shouldn't.

Bill Brovold, a guitarist who came up in the New York no wave scene in the early '80s and is known for his work with avant-rock outfit Larval, and Jamie Saft, a wide-ranging keyboardist with aggressive tendencies and tremendous outside cred, pair decently well on paper. That's no real surprise. The shocker is in how they pair and what they play here. If you're looking for an aural assault or a gut punch, this isn't it. Expectations be damned! Saft, in an inspired change of direction, leaves his keyboards behind and picks up dobro and lap steel guitar. Brovold sticks with electric guitar, but he avoids any trickery, excess, and/or strange effects. Together, they keep it simple, creating an album of front porch twang-and-strum, evoking peacefulness on the prairies and offering one American idyll after another.

"It began with the idea of making music that was 'Country Ambient' and arrived at something of an alternative state of consciousness," Saft notes. After hearing these twelve tracks, it's clear that the state he cites is one built on the act of rural woolgathering. Both men take their respective daydreams to the same places, gently and patiently chewing on beautifully uncomplicated ideas that speak to the aural American(a) virtues of Bill Frisell, Bob Dylan, Neil Young, and other like-hearted musicians. One number might meld steadiness and uncertainty ("Bemidji"), another may rely on a backdrop of arpeggiated chords to support the simplest of melodic bits ("No Horse Seen"), a third may conjure thoughts of tumbleweed and Ralph Stanley ("Splintering Wind"), and a fourth might just capture the essence of a breeze coasting over farmlands and the gentle pleasures of watching the crops rustle while sitting back with a piece of hay in your teeth ("Serenity Knolls").

This one may not hold great appeal for those who prefer the edgier sides of these artists and the boldest of musical works that regularly come off the RareNoise line, but it' a beauty nonetheless. Bill Brovold and Jamie Saft have managed to capture the heart, spirit, and sound of a country day in their duo explorations. Heartland, hearth, and home sweet home are well-represented on Serenity Knolls.