Wayne Horvitz: From A Window

By Mark Corroto
September 1, 2001
Sign in to view read count 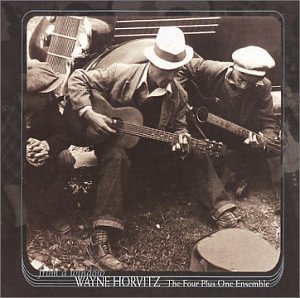 Of the many incarnations the music of Seattle-based Wayne Horvitz takes on, his Four Plus One Ensemble is the most contemplative. The one-time member of John Zorn’s Naked City and The New York Composers Orchestra has of recent days headed for a rocked-out West coast with his bands Pigpen and Zony Mash. 4 + 1 shares little with Horvitz’s other projects, except for maybe his role in the music of Bill Frisell and wife, Robin Holcomb.

From A Window is a stellar follow up to the 1998 Intuition Records release 4 + 1. Horvitz is a master of painting serene soundscapes where taken from a distance they appear placid. A closer look (listen) and the scene gets interesting. 4 + 1 assembles musicians to do just such subversive work. The violin sensation Eyvind Kang compliments avant trombone master Julian Priester as Reggie Watts, Tucker Martine, and Horvitz add electronic splashes and tones into a intricate mix of sometimes meditative, sometimes attention diverting music.

Horvitz’s now recognizable piano work is evident throughout and while there is a direct link between 4 + 1 and his band, The President, his sound has matured and maybe mellowed a bit. Written while living in Central Italy, From A Window shares the meloncholy of country life with a European modern music sensibility. Since it is a Horvitz creation, the unexpected surfaces, like drum machine passages that dot the “I” instead of dominate the scene. It is as if the modernity of his music is ever present yet doesn’t overtake the old-world nature of his compistions.