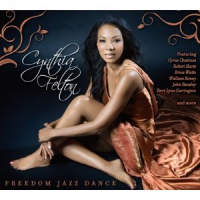 Vocalist/academic Cynthia Felton established herself right out of the gate with two artist-specific tribute albums that were stacked with A-list guests and highlighted her supple and soulful vocals. Felton's debut—Afro Blue: The Music Of Oscar Brown (Self Produced, 2009)—was a welcome nod to an underappreciated figure in jazz, and her journey through the world of constantly lauded jazz giant Duke Ellington was a worthy follow-up, but a third single-figure album would have been too predictable. Instead, Felton wisely broke from her past practice and simply selected some of her favorite standards for Freedom Jazz Dance.

While she bookends the album with a glorious, gospel-tinged a cappella miniature ("Oh Freedom) and an Eddie Harris classic ("Freedom Jazz Dance") that give this record thematic borders, the material in between is far-ranging and non-formulaic in selection. Felton slowly works wonders on "My Funny Valentine," which opens on trumpeter Wallace Roney's horn and features Robert Hurst's arco bass work, and she proves equally capable in the up-tempo territory of "Cherokee." Elsewhere, she imbues "Lost In The Stars" with Sunday morning spirit, scats up a storm on "Take 5" and "Close Your Eyes," and sings over the undulating music of "Nature Boy" with class and style.

Felton's patchwork assembly of musicians for her albums flies in the face of the use-a-single-tight-unit ideal that's so prominent in jazz, but she's made it work beautifully on all three records; in fact, the variety of personalities actually enhances the overall experience. Felton pairs the players with the songs that suit them best, making for a tailor-made outing for all involved. Pianist Cyrus Chestnut, for example, delivers his patented tremolo-based soloing ("Better Than Anything") when needed, but Felton turns to John Beasley, Patrice Rushen and Donald Brown when she's looking for something else. With five bassists, four pianists, three drummers and a variety of other personnel on hand, the possibilities are endless and Felton finds the right fit on each and every tune.

Felton is now three-for-three with the release of Freedom Jazz Dance, a fine addition to her discography and an excellent showcase for her voice, which lives at the crossroads of pure jazz, soul, R&B and gospel music.

Oh Freedom; Take 5; My Funny Valentine; Better Than Anything; My Love Is; Duke Ellington's Sound Of Love; Close Your Eyes; Nature Boy; Lost In The Stars; Cherokee; What Are You Doing The Rest Of Your Life; Freedom Jazz Dance.