Bastet: Freedom is a State of Mind 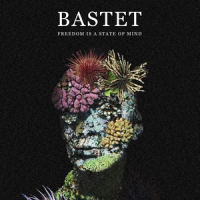 The tough thing to do with a jazz trio of any kind is to make an impression. There are lots of trios out there—economically it's the best configuration if one wants to take home a little cash from the gig—and a lot of them are good. A few are great. Nearly all of them are more-than-competent, but... there's no there there. Not so Bastet, who now seem to be tottering on the ragged edge of greatness, as evidenced by the music on Freedom is a State of Mind. The last time the Bay Area-based jazzers released an album, they were a quartet. With the departure of saxophonist Tim Lin, Bastet is now a trio. Led by guitarist / composer Justin Rock, and powered by the virtuosic rhythm tandem of Giulio Cetto and Mike Quigg, Bastet's musical thang remains intact and even gets extended somewhat with the loss of Lin's co-lead voice. If anything, Cetto steps in as the trio's other primary soloist, a role he seems to relish. And although electronics aren't listed among the band credits, someone (engineer Jamie Riotto) is judiciously adding other sounds to some of the tracks. The atmospheric, post-rock-informed "Earplugs and Ambien" has a subtle droning keyboard backdrop, while a spooky vocal effectively doubles the melody on "Broken Blinds." But the songs—and they are decidedly songs—on Freedom is a State of Mind get by on the sheer strength of Rock's thoughtfully quirky harmonic constructions and hooky melodies, and the trio's uniformly excellent soloing and ceaselessly sparkling interplay.

The decidedly leftfield stylistic slant the band displayed on their previous album, Eye of Ra (self- produced, 2015) remains intact. Bastet's music is quite friendly, but completely uncompromising. Rock stretches things out a bit further here, venturing into almost-straight-ahead jazz on the hard-swinging "Song 3," getting into some proto-mathy rock grooves on "You've Got a Hardcore Face," and letting the whole trio cut loose with some free-associative grooving on "There is No Secret." Equally comfortable rocking out (check out "Think Peace," and "You've Got a Hardcore Face"), as they are with more subtle, jazzy settings ("Transient," "Tina Tioga"), Bastet also has no problem leaving empty spaces, as on the brief opener "When it Rains" and the aforementioned "Earplugs and Ambien." In its entirety, Freedom is a State of Mind gracefully treads the same sort of terrains previously explored by Pat Metheny on Bright Size Life (ECM Records, 1976), Bill Frisell on Lookout for Hope (ECM Records, 1988), and Marc Ducret on La Theorie du Pilier (Label Bleu Records, 1987). Unmistakably part of the jazz firmament, Bastet's music draws on diverse influences in a unique way. The result is something simultaneously novel and familiar.

When It Rains; Think Peace; Broken Blinds; You've Got a Hardcore Face; Earplugs and Ambien; Song 3; Transient; Freedom Is a State of Mind; Tina Tioga; There Is No Secret.

Title: Freedom is a State of Mind | Year Released: 2016 | Record Label: Self Produced