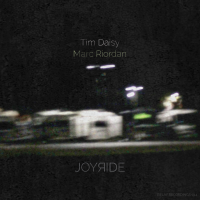 Critics often speak of the chemistry between two musicians. Why? Because, it is so very easy to toss out this abstract, non-quantifiable concept. Those who agree, nod. Those who differ, well they have nothing on which to challenge your statement. But here I go, Tim Daisy and Marc Riordan showcase a stellar musical affinity on their duo release Joyride.

Chemistry is a key ingredient, no it is the most important piece of the puzzle when artists create an improvised recording. It has to be. If Daisy weren't listening and responding to Riordan, and vice versa, these seven tracks wouldn't sustain themselves.

Maybe this duo works because both players are or were, drummers first. Daisy is a member of many Ken Vandermark ensembles and those of James Falzone, Russ Johnson, Aram Shelton. Daisy has, of late, begun expanding beyond his drum kit, composing for marimba, turntables, gongs, chains, clocks, and here, radios and metronomes. Riordan, has leaped from drums to piano. Showing his keyboard talents on Binoculars (2012) and on Daisy's October Music Vol. 1 -7 Compositions For Duet (Relay, 2014).

This seven song, forty-one minute studio recording from January 2016, is a mostly piano/drums affair. It is improvised in a "composerly" manner, meaning the two make beautiful music together. Riordan's left hand forages on the opener "Pay To Play" when Daisy exercises his brushes. Their music making is a friendly game of back-and-forth catch with broad Cecil Taylor-like gestures on "Pray To Play" and much smaller intimate sounds on "Train Quill Writings." The latter piece juxtaposes an almost ECM piano sound against radio static, metronome ticks and Daisy's menu of expressive drumming. The pair charge through "Rolls Of The Roll (for Conlon Nancarrow)" energized with a streaker's birthday suit. Daisy keeps the found objects to a minimum here, which is a pity because they add so much to the mix. "Stay Wakeful," an epic piece, ventures into his toy bin chains and rattles, and finally some radio static. The music only hints at more to come. Let's hope so.