Born and raised in a small suburban town called Fremont, California, Tim Lin is a Taiwanese-American jazz talent whose progressive sound comes from his love of the bebop jazz tradition and history.

In his youth, Tim studied with bay area saxophonist and educator Dann Zinn. Guided by Zinn's inspirational teaching for developing craftsmanship of daily practice, Tim discovered his passion for jazz and calling to become a musician.

Soon after, Tim received a scholarship to study with the world-renowned jazz recording artist Bob Sheppard at the University of Southern California Thornton School of Music.

During his college years in Los Angeles, Tim was a member of the award winning USC Thornton Jazz Orchestra lead by Bob Mintzer, in addition to the USC Honors Combo directed by Jason Goldman.

Tim was the first runner up for the International Taichung Saxophone Competition behind Tivon Penicott. Tim was also a finalist in the 2018 Thelonious Monk Institute College Program (Herbie Hancock Institute of Jazz) where he performed for Wayne Shorter, Herbie Hancock, Ambrose Akinmusire, and Herb Albert.

Tim has been mentored by some of the greatest tenor saxophonists of our generation including Bob Sheppard, Bob Mintzer, Larry Schneider, and is currently a student of Jerry Bergonzi.

“Tim Lin’s debut album is a knockout. His sensitivity, enthusiasm, language, and articulation give him his own voice. Congratulations.” - Jerry Bergonzi 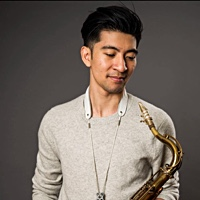 All About Jazz musician pages are maintained by musicians, publicists and trusted members like you. Interested? Tell us why you would like to improve the Tim Lin musician page.