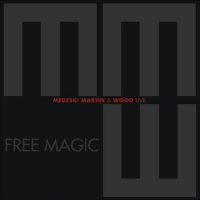 Free Magic: Live is the first release of by trio Medeski Martin & Wood from its third decade of existence. Maybe I should repeat that. This disc is by a jazz band that has remained intact for more than 21 years. Like a family, the trio has born musical genres, specifically the infamous jamband phenomena, matured, and branched out from electric to eclectic.

Perhaps MMW's greatest contribution to modern jazz was its DIY touring philosophy. Like punk bands of the 1980s, MMW often toured unsupported (by a record companies), playing gigs in bars and on college campuses, then packing its instruments in a van and playing somewhere else the next day. The group's relentless touring garnered a new audience to its music-and to jazz, for that matter. Along the way, MMW has collaborated with guitarist John Scofield, DJs Olive and Logic, and legendary Sun Ra saxophonist Marshall Allen.

This disc follows the live Scofield collaboration, MSMW Live: In Case the World Changes Its Mind (Indirecto, 2011), and digital-only 20 (Indirecto, 2011). Recorded on an all-acoustic tour, these five tracks evidence a hard working trio in full flight.

The opener, bassist Chris Wood's "Doppler," initially finds drummer Billy Martin seeking a groove on the xylophone-sounding African balaphone, while pianist John Medeski works simultaneously on melodica and a toy piano. The music gives way to a piano trio soul-jazz groove as infectious as any mid-1960s Blue Note offering. This is MMW at its finest, Martin shuffling the beat to Wood's rock-solid timekeeping. The genius of this band is that it can disassemble a song and put it all back together almost effortlessly. "Blues For Another Day" opens in mayhem, Medeski pounding notes à la Cecil Taylor, before the band settles into a gospel-tinged blues. The band feeds off a hypnotizing delivery, both in groove/swing and in instant composing. The title track begins with a metal-on-metal-themed improvisation, drawing attention to the acoustic nature of this tour. The band expands and expands its simple "Where's Sly" until it becomes an anthem that is bejeweled with Billy Martin's extended drum solo.

The band ends at its beginnings. The homage medley "Nostalgia In Times Square/Angel Race," transfuses Charles Mingus' soul into the stratosphere of Sun Ra's explorations. As with any MMW performance, the destination is not as important as the musical journey.