Maximize your visibility at All About Jazz by upgrading your musician page from standard to premium. With it, you'll receive All About Jazz home page exposure, a highly stylized / ad-free musician page with bonus features and benefits, an ad, plus you control where you sell your music and so much more.
Learn More
301 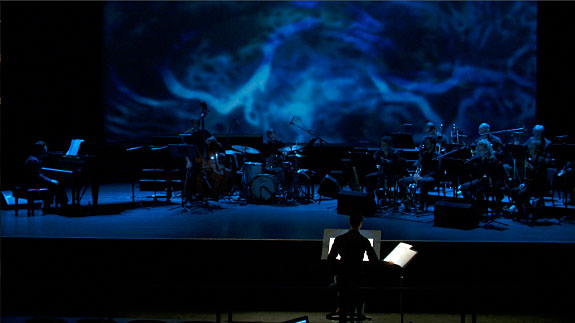 BY DR. JUDITH SCHLESINGER
May 16, 2011
Sign in to view read count
There's much to say about the extraordinary My Coma Dreams, the new multimedia piece that describes the medically induced coma experienced by pianist/composer Fred Hersch in 2008. But three days after its world premiere at Montclair State University's Kasser Theater, I'm still looking for the right words to describe it. It seems that my usual critic's concerns keep dissolving under the visceral pull of the thing.

This 70-minute piece grew out of eight dreams Fred remembers having during that awful time. For two months he was kept alive with nine tubes and a flank of machines while doctors hunted the infection that had shut his body down. No one knew whether he would return, and what condition he'd be in if and when he did. Paralyzed? Mute? Mad?

Meanwhile, since Fred lay motionless for so long, his hands were curling into permanent claws. Massaging those precious hands and arms every day was about all his anguished and devoted partner, Scott Morgan, could do for him—but it's probably a big reason Fred now plays as well as ever. In Dreams he anchors the 11-piece ensemble that plays his distinctively blended score of jazz and classical music (jazzical?).

Given its title, My Coma Dreams sounds like great fun for fans of TV's "House," with its weekly parade of bizarre and bloody illnesses. It even might appeal to folks who attend NASCAR rallies hoping for a crash, or those who inch happily toward any twisted metal and spinning lights they see on the highway. And truth be told, there is a voyeuristic aspect to Dreams—it's just not the usual kind.

When he created the narrative and lyrics, writer/director Herschel Garfein interviewed Fred, Scott, and Fred's doctor, Michael Ligouri. He wanted the words spoken and sung by the marvelous Michael Winther, playing each person in turn, to ring absolutely true and leap the usual chasm between stage and audience. The result is that some painful recollections are so close-to-the-bone that, at first, it feels rather intrusive to witness them.

But any such barriers soon crumble and fade. For one thing, Fred's glorious music draws us close, opening our hearts and inviting us to trust his journey. Behind the band, moving across a giant screen, Sarah Wickliffe's brilliant images bring us even further in—since they are more suggestive than explicit, they take fast hold of our imagination and weave their own spell.

Here are some examples. Early on, we're riding in the ambulance: diffused orange lines rushing toward us show how fast we're traveling, while flashes of a police badge remind us how dangerous this journey is. Later on, in the section called "The Orb," when Fred begins to perceive Scott's loving presence, even in his darkness, we too can feel its glowing warmth. Fred's solo piano here is nothing less than the sound of love; in fact, it just might be the most unabashedly tender music I've ever heard from him. Ever. (Please note: given my decades of fandom, this is saying a great deal.)

There's humor in Dreams too, especially during the "Jazz Diner in the Woods" segment (actually, I'm not sure if this is a dream or nightmare—it's a gig, yes, but the chick singer is really bad.) Here we get a close-up of that standard glossy diner menu, but this one has weird items like "Ornette Coleslaw" and "Strange Fruit Salad," and there's also a band swinging like mad while you make your selection. In another sketch, Thelonious Monk's music is expressed as floating shapes that are odd, pointed, and perfect. There's also a history lesson about St. Vincent and the tragic closing of his namesake West Village hospital—the place that saved Fred, not just once but several times.

For me, the indelible moment relates to Fred's arduous physical rehab. First we hear that when he was relearning to walk, he looked over one day to see another man who was also struggling to drag himself along. The kicker is that he was actually looking at a mirror

This jolt is followed by an image I may never forget: Fred rises from the piano bench to stand absolutely still, slightly hunched and facing away from us, with his hands posed robotically in midair. He holds that pose for at least a minute, expressionless and silent, slamming it home that it was this body that was ravaged, and this genius that we nearly lost. Storytelling doesn't get more effective and authentic than this.

But by now we are so completely engaged that Fred's suffering has actually become our own. We are all patients in the ambulance, we have all cried lover's tears. This merging is even more stunning because it dawns on us so naturally, without having to be gobsmacked by some forced and treacly sentiment about community and connection.

Perhaps this is why the audience, after all their cheering, shuffled silently out of the theater. We were left with so much to mull over that most people seemed thoughtful, and many looked simply dazed.

All told, My Coma Dreams is a searing and powerful statement about our shared humanity and the redemptive power of music and love. Who else but Fred and his crew could uplift such personal tragedy into such healing art?

In a just world, this is the stuff that Pulitzers are made of.