By Dan Bilawsky
August 1, 2012
Sign in to view read count 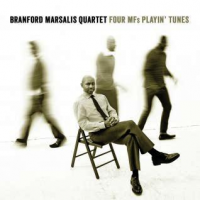 Saxophonist Branford Marsalis has always exhibited a straight-to-the-point attitude in his deeds and musical actions, so the title for his latest quartet date shouldn't come as a great shock. His choice of words matter-of-factly proclaims that this music isn't about highbrow ideals, umbrella themes or hyper-intellectual constructs; this is about four musicians making music and serving the songs.

Jazz aficionados know that his albums are almost always a sure bet for brilliance, but fans of this highly regarded unit may come to this record with trepidation since they're still bemoaning the departure of longtime drummer Jeff Tain Watts. Their concern is a valid one in theory, but this music should allay their fears. Drummer Justin Faulkner, making his recording debut with the group, seems to have found his footing while playing with the quartet over the past three years. He comes to the music with confidence and a willingness to do what's necessary. Some people may have scratched their heads in bewilderment when he joined the group, wondering why Marsalis didn't go with a seasoned veteran instead, but the answer is right here on this disc. Faulkner's malleable bearing, creativity and chops make for a killer combination that helps the Branford Marsalis Quartet maintain their standard of excellence in the post-Tain era.

The music on Four MFs Playin' Tunes covers a wide range of moods, from heart-aching ("My Ideal") to earthshaking ("Whiplash"), but the focus is always on in-the-moment, conversant interplay rather than variety for variety's sake. The quartet doesn't look beyond the work at hand and that benefits every number, as they're able to fully invest themselves in each piece. Tropically-tinged modernism ("The Mighty Sword"), flowing contemplation ("Maestra") and wondrous jumbles of melodicism buried under a deluge of notes ("Endymion") come into the picture at various times, as all four men feed off of each other to find their way.

While originality is paramount to Marsalis' esthetic, and ever-apparent in this work, he isn't beyond the concept of tipping his hat to those who deserve it. He dedicates the album itself to the memory of several important figures, including drummer Paul Motian and saxophonist Frank Foster, and he gives nods, directly and indirectly, to two other jazz giants along the way. Pianist Thelonious Monk comes into focus with a performance of his "Teo," but he also casts a shadow over bassist Eric Revis' hip and bluesy "Brews." Marsalis slips a cute "If I Were A Rich Man" quote into his soprano soloing on this one and the melody moves along with a quirky, Monk-ish gait that's a total delight. Soprano saxophone forefather Sidney Bechet is the other subject of tribute, as the band takes an unexpected turn with the album-closing "Treat It Gentle." Marsalis borrowed the title for this tune from Bechet's autobiography and he channels the New Orleans legend, while also honoring his own connection to the Crescent City, on this breezy original.

Four MFs Playin' Tunes may have a very plainspoken motive behind its making, but it's not simple and it deserves a grand reception. This record is a real treat and further evidence of Branford Marsalis' mastery of all things musical.