By DAN MCCLENAGHAN
September 26, 2017
Sign in to view read count 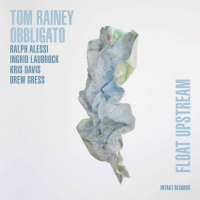 Drummer Tom Rainey's reputation runs toward the "outside." His "worked with" resume speaks loudest perhaps from his collaborations with saxophonist Tim Berne—not a guy given to relaxing into a reverent take of, say,  "What's New" or "Stella By Starlight." So a set of the familiar standards from Rainey comes as a bit of a surprise.

Tom Rainey Obbligato, featuring a trumpet/saxophone front line with a piano/bass/drums rhythm section line-up that has been the standard jazz combo since Charlie Parker and Dizzy Gillespie helped birth bebop, take on a batch of the familiar on Float Upstream, with their own form of off-kilter reverence. But they—like the iconic alto saxophonist Lee Konitz and his new millennium recordings, including Standards Live (Enja, 2014)—put their own personalized stamp on the tunes, opening with "Stella By Starlight." It begins with a sigh, a gentle bass/piano exclamation, from, respectively, Drew Gress and Kris Davis, leading into trumpeter Ralph Alessi, who opens up making the most voice-like of remarks. Then the beautiful tone, in a whisper initially, from saxophonist Ingrid Laubrock, as the stars form up into the familiar constellation of notes of this much covered Great American Songbook jewel.

"The rest of the tunes receive the same idiosyncratic treatment of "collective playing and improvising on the standards" (from Christian Broecking's liner notes). Trumpeter Alessi and saxophonist Laubrock compliment each others styles in fluid dances, by turns haunting or joyous, serpentine or terse—rarely unison. And always—in conjunction with this on-edge rhythm section—pushing the boundaries of straight ahead in the direction of freedom.

"What's New" stretches out over a masterfully-molded ten minutes, beginning with Drew Gress' pensive bass solo that leads into Kris Davis' delicate piano touch, a tranquil songbird conservation of horns, a subdued drum rumble.  Alessi's solo finds the trumpeter at is most emotive. The same can be said of Laubrock on her tenor turn. A beautiful, classic given a new twist, on Float Upstream,  the second exploration of standards by Tom Rainey Obbligato. Here's hoping for a long life for the group.

Stella By Starlight; Beatrice; What Is this thing Called Love; What's New?; There Is No Greater Love; Float Upstream; I Fall In Love Too Easily.