BY MARK CORROTO
May 4, 2016
Sign in to view read count
2015 saw six releases by tenor saxophonist Ivo Perelman. It's early in 2016, and we already have five new releases. At this pace, one can only hope for five more. Certainly, noting the combinations of players presented here and the high level of improvisation, there could easily be ten more sessions with ten different permutations. Or, like Claude Monet painting the same haystacks in different light, it would be just as satisfying to hear Perelman's saxophone with each of the groups below on a different day, in a different mood. Let's explore the latest crop of Leo releases, and dream of the possibilities.

You could call them brothers from different mothers. Ivo Perelman and pianist Matthew Shipp have recorded (by my count) twenty-one records together in the last twenty years, sixteen of those since 2010. Like siblings, each of their encounters is a reunion, and listening to them perform, you immediately sense their telepathic communication.

These duets, maybe better called dialogues, are entitled Corpo or body. Not bodies. Maybe that's because as musicians, they are two sides of the same coin. Improvisers. Brothers. This 2016 session follows the double CD Callas (Leo, 2015), Complementary Colors (Leo, 2015), and The Art Of The Duet: Volume One (Leo, 2013).

Shipp is a leader in his own right, with his trio, quartet, duos with Michael Bisio, and, more often than not, in solo performance, he has created a unique language for piano. One that could be described as a conservatory trained Thelonious Monk. This session was recorded "Part 1" through "Part 12" and reproduced in order. The twelve pieces, the shortest being 1:41 and longest at 6:13, are delivered in a conversational manner. Their history allows them to spontaneously create music, sometimes acting as a counterbalance, other times as a direction finder. "Part 8" is a great example. Shipp opens with a meditative sound before stabbing jagged notes that inspire Perelman to enter in the upper register, only to slide into a talkative melody and the pair gambol to the end. Each piece here is chock full of small surprises of sound that would be considered grand gestures by any other two artists. 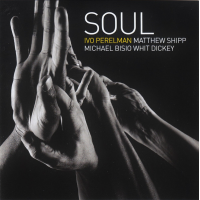 Shipp is also at the piano bench for Soul a quartet session that reunites Perelman with the familiar partners bassist Michael Bisio and drummer Whit Dickey. They had previously released The Edge (Leo, 2013) and The Outer Edge (Leo, 2014). This session would be Bisio's fourth with the saxophonist and Dickey's seventh. With Shipp, the pair released the memorable To Duke (Rogue Art, 2015) a trio re-imagination of Ellington's signature music.

Recorded one week after Corpo, this quartet supplements the duo by complementing its sound. In 2015, while overseeing an exhibition of his paintings and drawings (he is also a fine artist) in his native Brazil, Perelman reconnected with the pioneers of the 12-tone system, Schoenberg and Webern. His five month study opened his eyes (well, ears) to a more relaxed sound. Compare this music to his Black On White (Clean Feed, 2004) recording from 2001 and the change is obvious. Nothing is forced here, although the music has great force. The title track bears this out. Shipp's solo introduction gives way to a plaintive horn and whispering brushwork. The quartet locks into the solid pulse of Bisio and rides the ineffable beauty that is life's ugliness. They counter the melancholy with "Joy," Perelman at first sounding breathy like Lester Young before jumping to the upper register. Guided by Bisio, he negotiates his way into the bash of cymbals and Shipp's piano insistence. Let's call them demands. The push/pull of saxophone and piano is moderated by bass and drums, neither of which take sides. The quartet plays with found melodies, some an eye-opening revelation. Who needs a written score when you have improvisers of this high caliber? 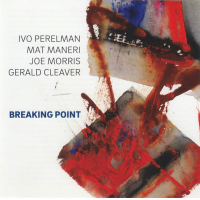 Exit one established quartet and enter a new configuration. Let's call this quartet, Ivo Perelman with strings. Not exactly a string quartet like the The Passion According To G.H. (Leo, 2012) session he recorded with the Sirius String Quartet. This quartet features the viola of Mat Maneri and the double bass playing of Joe Morris, plus drummer Gerald Cleaver.

Maneri and Perelman released a duo Two Men Walking (Leo, 2014) and a trio Villa Lobos Suite (leo, 2015) with violist Tanya Kalmanovitch. The saxophonist's relationship with Morris dates back to his Strings (Leo, 1997) where he plays cello exclusively and Morris, guitar. More recently there is the electric free-for-all One (RareNoise, 2013) with noise drummer Balázs Pándi and Morris playing electric bass, and a trio Perelman/Morris/Cleaver Counterpoint (Leo, 2015).

Here we find a distinct new configuration. From track one, "Harsh Moon," Perelman, under the influence of Maneri, tailors his tenor to sound like a stringed instrument. When the pair trade notes here and on "Catch 22," it is easy to substitute one for the other. Maneri's angles become Perelman's angles. Cleaver is a master of the accented accompaniment and the bass might be the easiest entryway into Joe Morris' music. The longest piece, "The Forest Of Feet And Bass Drums," at nearly 15 minutes, may be the signature work of this quartet. The instant composing quartet creates a mini-epic odyssey. From its tousled opening, with players bidding for the piece's direction, the music evolves, each player soloing before the climax, then a beautifully sweet resolution. 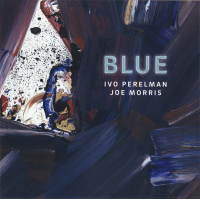 This is not the first occasion of Perelman recording in a duo setting with guitarist Joe Morris. In 1996 the saxophonist laid down fifteen tracks on cello, his first instrument, and Morris dubbed his solos onto the pieces for the Strings (Leo, 1997). The pair have made multiple records since, with Morris on electric guitar, acoustic bass, and electric bass. This very intimate duo probably could not have been made twenty, or maybe even ten years ago. Perelman has developed a more nuanced sound, and it can be argued, is more attuned to silence. Or, at least the silence between notes.

It is a pleasure to hear Morris' acoustic guitar. Like his bass playing, it is an avenue into the denser sound of his electric work. An interesting precursor to hearing him here is his solo work for acoustic guitar Singularity (AUM Fidelity, 2001).

But for instruments, this recording parallels Corpo, the saxophonist's duo, recorded just one month prior, with Matthew Shipp. Like the most recent work with the pianist, we hear his most sympathetic playing. If the tenor saxophone is the closest brass instrument to the human voice, the conversation between Morris and Perelman is heart-to-heart. They chase old memories on "Almost Blue," upper register talk urges strummed then quicksilver passages. The pair loiter often, as if to consider the fleeting nature of their sound. Even when they do kick it into a flurried attack, like the minute long "Bluebird," the music resolves itself with benevolence. 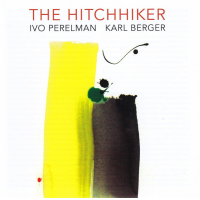 In 2014, Ivo Perelman and Karl Berger, playing piano, recorded the duo session Reverie (Leo) with the intention of making a second recording with Berger on vibraphone. That get together had to wait another two years for The Hitchhiker. Certainly, it was worth the wait.

Berger, adept at both piano and vibraphone, founded The Creative Music Foundation in 1971 with Ornette Coleman and Ingrid Sertso in Woodstock, New York. He has been an improvising artist, recording for more than fifty years as a leader and with Don Cherry, the Globe Unity Orchestra, Carla Bley, and Lee Konitz. His duo recording Conversations (In + Out, 1994), now a vinyl freak's treasure, is very likely the inspiration for this session. More recently, he made a jaw-dropping recording Moon (NoBusiness Records, 2015) with cornetist Kirk Knuffke.

The vibraphone, a percussive instrument, melds seamlessly with the tenor saxophonist. Perelman has always had an affinity with percussionists like Gerald Cleaver, Whit Dickey, Gerry Hemingway, and Jay Rosen. The same holds true with Matthew Shipp, a very percussive player. With Berger on vibes, the saxophonist has found a colorist that also lends a propulsive element. The pair glide here, and that's the best word to use. Glide. A ballad-like "The Well Of Memory" tugs heart strings and "Twilight" could even be a piece of imagined Appalachian folk music. The pair play off each other, bouncing notes on "Zen And The Art Of Improvisation," as if they were of the same mind, each finishing the other's thought. Can we propose first, a Perelman session with Karl Berger and Mat Maneri? Next one with Perelman, Berger and Gerald Cleaver? Then, Bisio, Shipp, and I could go on and on.

Tracks: The Shadowy Path; The Well Of Memory; Twilight; Unspoken Feelings; The Hitchhiker; Pride And Prejudice; Extremely Loud While Incredibly Quiet; Engulfed In Flames; Zen And The Art Of Improvisation; The Sound Of Bliss; Well-behaved Quarter Notes.