By JOHN SHARPE
November 4, 2015
Sign in to view read count 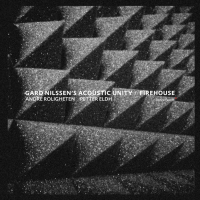 With his new Acoustic Unity threesome Norwegian drummer Gard Nilssen enters the saxophone trio stakes with an ebullient swagger. Since coming onto the scene in 2006, Nilssen has become an in-demand figure, featuring in outfits such as Cortex, bassists Arild Andersen's sextet and Per Zanussi's quintet. On Firehouse, the group carves out a distinctive identity manifest in tight, sometimes involved, arrangements which provide launchpads for focused group exploration set firmly in the jazz lineage. At times in their raw energy they recall another Scandinavian power trio in The Thing, while at others their garrulous nature even evokes Sonny Rollins' trio excursions.

Nilssen and Swedish bassist Petter Eldh form a compact rhythm section. On drums, the leader combines clout and precision, in the manner of his compatriot Paal Nilssen-Love, while Eldh proves muscular yet melodic. Much rests on the shoulders of saxophonist Andre Roligheten fronting the trio and he makes the most of the ample space afforded him. While remaining largely within the tonal tradition, he works rhythmic motifs hard. A fluttering melismatic tremolo forms one of his favorite gambits on tenor and soprano saxophones.

Although often perfunctory, the themes in the 37-minute set, drawn from each member, encompass a broad range, and go through numerous transformations. Staccato tenor and drums start the reedman's "When Pigs Fly" with a bang, before blooming into a fast walk. Both saxophone and drums call upon the jerky head at different points to invigorate proceedings. A short reflective passage for tenor and bass precedes a return to the recurring opening cadence. On the leader's "Roundtrip," Roligheten exchanges phrases in a call and response sequence with knotty bursts of drum and bass, increasingly overlapping before gradually deconstructing into burps and flickers. But then in another unexpected shift, a cantering Latin feel develops to inspire preaching saxophone.

By way of contrast at the extremes, "Salad Days" showcases breathy tenor and lyrical pizzicato as the trio switches into ballad mode, while "Mojo" is all violent churning turbulence and squalling saxophone skronk. Eldh's "The Resistance" features light airy folk-tinged soprano with a loping groove. Jointly credited to all three principals, "Life, Somewhere Before The Exit Signs" begins with tenor keypad pattering squawks and drone over an atmospheric shuffle, and closes with what could pass as a brief theme statement. Notice is served that these are three names to watch out for.