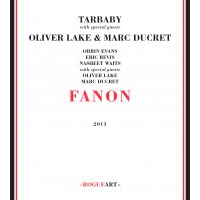 For their fourth album, the collective trio Tarbaby maintain their simultaneously tradition orientated but forward looking aesthetic. At the heart remains the piano of Orrin Evans, bassist Eric Revis and drummer Nasheet Waits. But from the start they have been open to change. As a consequence only one of their releases features the three principals alone. And Fanon continues that pattern with the inclusion of special guests saxophonist Oliver Lake, (who has a history of collaboration with the band) and guitarist Marc Ducret for an absorbing 11 track studio program recorded in September 2011.

Tarbaby received a French American Cultural Exchange grant from the Mid-Atlantic Arts Foundation for the project inspired by the writings of Frantz Fanon, a Martinique-born Afro-French psychiatrist, philosopher, and revolutionary. However after the opening "Small Pieces, Tiny Pieces" in which a child narrates a story of horror and brutalization from Fanon's A Dying Colonialism (1961), the dedicatee's influence is more apparent through the song titles than their content. Certainly graphic extremes of the anger and violence do not feature prominently in the swinging charts, which stem from across the band.

Even "The Re-Created Man" and "FLN Stomp" -the pair of brief duo inventions by the two guests -showcase mercurial interplay rather than the extended freeform mayhem of which they are capable. Elsewhere three cuts serve to highlight the talents of the core threesome. Waits, one of the most tuneful of drummers, in a lineage stretching back to Max Roach via Ed Blackwell, introduces "Between Nothingness and Infinity" by a sequence of rolls circulated around his kit before settling on an ostinato. Then later Evans' flowing boppish lines vie for attention with the bassist's melodic contrapuntal asides. By contrast, the airily sketched "O My Body" appears spontaneous, with Evans going under the bonnet for atmospheric effect and Revis' bass foregrounded.

On the remainder of the album the full quintet navigates the thoughtful arrangements. "Black Skin White Mask" proves an edgy intro to the band, swinging with an Ornette Coleman vibe, before an exciting change of gear to finish. Lake brings his familiar acerbic tone and squealing runs to the project, adding spice with his vocalized saxophone cries, while Ducret's slashing guitar and floating sustain heighten the inherent drama. Evans' "Liberation" Blues revels in a in an intricate unison, while Ducret's ..."Shall we not Revenge?" builds from knotty interaction to a throbbing finale. Over Evans' bluesy underpinnings on the concluding "One Destiny," the trio's increasingly dominant voices finally renew the link to Fanon by repeating the "Small Pieces, Tiny Pieces" refrain to the fade out.

Small Pieces....Tiny Pieces; Black Skin White Mask; Fanon; Between Nothingness and Infinity; The Re-Created Man; Is It Real; O My Body; Liberation Blues; FLN Stomp; ...Shall we not Revenge?; One Destiny.