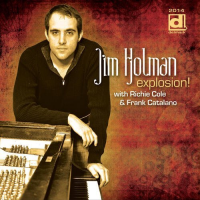 Up-and-coming Chicago pianist Jim Holman channels all his musical influences into his debut recording without losing his own personal identity. The resulting Explosion! is an intriguing album that treads the border between hard bop and bolder styles.

Recorded in two sessions, the disc features Holman in the company of more established musicians like saxophonists Frank Catalano and Richie Cole. Holman deftly leads both quartets and is not overshadowed by his more experienced band mates on almost all of the tracks, the exception being an old-fashioned, R&B-ish "Shakin,'" where Catalano's big horn sound, tight and acerbic, is a direct descendant of the honking and screaming saxophone of men like Big Jay McNeely and Willis Jackson. As such, the tenorist dominates with his complex yet accessible and irresistibly toe tapping solo.

Catalano's characteristic gut-bucket tone opens a bluesy "Bye, Bye Blackbird," but the fury of his notes is tempered by an edgy, expansive, piano and drum duet between Holman and Rusty Jones, keeping things fresh and exciting.

Holman's modal improvisations build a new and exciting soundscape around Joe Henderson's "Recorda Me," while simultaneously maintaining the melodic romanticism of the original. Meanwhile Brian Sandstrom handles his double bass like a large flamenco guitar adding to the song's Latin flavor. Sandstrom continues to exhibit his supreme facility becoming almost one with his instrument on "Straight No Chaser" that also showcases Rick Shandling's propulsive and hyper-rhythmic drumming and altoist Cole's fluid sonic spirals.

Holman's compositional aptitude is evident on the dark and exotic tribute to Bill Evans, "Bill," that also features his classically inspired extemporizations. His angular take on Herbie Hancock's "Cantaloupe Island" brings to mind Don Pullen's circular pianism as he flirts with free jazz while remaining firmly grounded in the mainstream.

This freshman effort from a tremendous talent is not only a delightful listening experience it is also, hopefully, a portent of greater things to come from this interesting new voice in jazz.