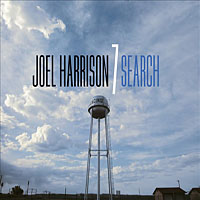 For over a decade, Joel Harrison has been steadily expanding his palette as a composer, although his penchant for unorthodox instrumental combinations and multicultural folk forms encompass only one facet of his inclusive aesthetic. Harrison's most recent efforts have borrowed heavily from Western neo-classical tenets; The Wheel (Innova, 2008) included an expansive five movement suite for jazz quintet and string quartet, while The Music of Paul Motian (Sunnyside, 2011) featured stately arrangements performed by two electric guitarists and a traditional string quartet.

Search contains some of Harrison's most seamlessly integrated writing for disparate forces to date. Supported by an archetypal jazz rhythm section, comprised of pianist Gary Versace, bassist Stephan Crump and drummer Clarence Penn, Harrison is joined by tenor saxophonist Donny McCaslin and two string players: violinist Christian Howes and cellist Dana Leong, who have both collaborated with the guitarist in similar contexts before.

The septet's broad instrumental palette lends the album a wide dynamic range that keenly exploits Harrison's versatile gifts as a composer; he solos infrequently however, allowing his sidemen ample opportunity to express themselves. Harrison's harmonious contrapuntal themes underscore the bulk of the record, as typified on the panoramic opener, "Grass Valley and Beyond," where Versace's prismatic cadences and McCaslin's intervallic salvos paint a vibrant aural canvas; the saxophonist's dramatic altissimo crescendos and multiphonic flourishes punctuate the proceedings like rich impasto accents. Howes and McCaslin engage in spirited interplay with the cagey rhythm section on the capricious swinger "All the Previous Pages Are Gone," while "A Magnificent Death" and "The Beauty of Failure" exhibit a range of classicist tendencies; the former ascends from hypnotic minimalist motifs to a rapturous climax, the later weaves lyrical thematic variations into a romantic coda.