By Mark Corroto
January 2, 2003
Sign in to view read count 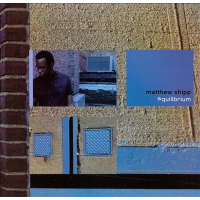 The musical explorations of Matthew Shipp in this new century remind one of similar investigations by Miles Davis forty years ago. Back then, Miles explored modal jazz and his audience followed. He played third stream music, a combination of jazz and classical, and lifted his audience, as all of us wanted to explore Spanish music after his sketches.

Shipp, who began his career on the outside reaches of free jazz and classical music, has turned into the pied piper of ‘nu jazz.’ His role since 2000 has been the producer of the Blue Series for Thirsty Ear records. In this capacity, he is leading younger listeners to jazz and mature jazz fans to younger music. His fusion of improvisation with DJ culture, Hip-Hop, and electronic music is one of melting and amalgamation to create a catalytic effect. There are no pieces and parts; this is a whole concept.

Equilibrium opens with the haunting title track, braiding piano explorations over muted vibes and cymbal work. This sets up Shipp’s concept of improvisation over rhythms and urban beats. His piano (notably left hand) supplies the groove, along with repeated beats for Khan Jamal’s flourish of notes. Shipp plays the rhythm master throughout, lending credibility to the programmed beats of today’s music. When he lays down a bell-like rhyme on “Cohesion” the funk vibe underneath and the DJ cuts and samples gain acceptance.

Shipp merges man with machine. When the synthetic is applied, he orchestrates William Parker’s passionate bass or Khan Jamal's ringing vibes. Shipp draws you in with the ‘nu’ but slays you with the tested and true. His introverted piano playing on “World Of Blue Glass” comes in classic trio format, but fits naturally in with his established beats against spacious vibe. He plays funky rhythms and break beats to lure you back to the imaginary world of creative jazz. Shipp’s design works to perfection.