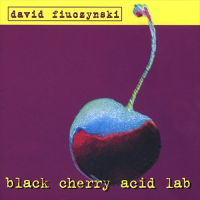 When Black Cherry Acid Lab first came out as a rough CD-R a few years ago, it caused a bit of a stir among insiders. Guitarist David "Fuze" Fiuczynski had established his idiosyncratic (to say the least) style with the Screaming Headless Torsos, but here he was stretching his music to new extremes. Now that the record has been officially (re)issued on his Fuzelicious Morsels record label, it should shock and surprise a broader audience.

BCAL roams from driving funk to heady punk, from grinding metal to swinging jazz. The group ranges in size, but most often it's a quintet with integrated vocals. Rapper Ahmed Best makes dramatic appearances on all but two tracks, riding roughshod over changing grooves. At times he sounds like he's openly freestyling (for example on "Bollocks"), and at others he's clearly following a master plan. He joins ex-Torsos member Dean Bowman, Sophia Ramos, and Fuze on the vocal stage. Their lyrics take on topics like insanity ("My mind gets hazy, and I go crazy!"), sweatshops ("I wanna be UNlike Mike!"), and the tragedy of contemporary radio ("The crowd that's spawned by and for the man with short or no attention span"). Keeping true to the rap tradition, Best tosses in a generous helping of cartoon swagger, celebrating (among other things) "the constant swing I bring with the power of my dingaling."

Enough on the song aspect. Vocal and sax improvisations pop in and out on BCAL, but the true combustion shoots from the strings of Fuze's guitar. He can provide support with shifting, off-center chords; but when the time comes to step forward, he shoots skyward. It's very hard to offer comparisons, though Hendrix certainly pops in and out and there's a certain resemblance to Vernon Reid. His Ornette-ish sense of harmony rides against convention (think Blood Ulmer). Fuze uses a sharp attack, blazing speed, and well-crafted effects to lend energy to his playing, whatever the style of any given piece.

BCAL is a short one, about thirty minutes long. There wasn't a lot of cash behind this record, which laments "big budgets for musical midgets who twist and fidget and think it's okay." BCAL 's roughness bespeaks a conscious avoidance of polish and widgetry, and the few scattered low points that result weaken the record's impact. But energy is the principal commodity here, and sensitive ears wil find it grating. That's fine. Softies should go and listen to mainstream radio. The rest of us can celebrate the spontaneity that helps keep creative music alive.