BY JACK BOWERS
January 2, 2003
Sign in to view read count 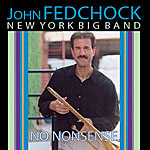 By the time this review has been written and (I hope!) read, trombonist John Fedchock will be on the final leg of a seven-month-long world tour that has included stops in Sweden, Norway, South Africa and a number of cities here in the US. Before leaving, Fedchock and his star-laden New York Big Band gathered at Avatar Studios in the Big Apple to record their third album for Reservoir Records, and it's a corker from end to end.

Fedchock, as good a writer as he is a player (trust me: that's plenty good), composed half of the ten selections on the suitably named No Nonsense and arranged everything else—Freddie Hubbard's 'Eclipse,' Joe Henderson's 'Caribbean Fire Dance,' Oscar Pettiford's 'Tricotism,' Monk's 'Epistrophy,' Ellington's 'Come Sunday.' Fedchock keeps the listener engaged by introducing a wide variety of moods, styles and tempos, each clothed in a contemporary big-band wardrobe designed to bring out the best in the ensemble and its phalanx of world-class soloists. 'As a bandleader,' Fedchock says, 'it's a great luxury to have players of this caliber in my group.' That it is.

The ensemble responds to every challenge with equal parts passion and poise, keeping the ship on an even keel while the rock-ribbed rhythm section, anchored by drummer Dave Ratajczak and including bassist Lynn Seaton and pianist Allen Farnham, takes care of business in the engine room. Everyone is tested immediately on the stormy 'No Nonsense' (solos by Farnham, tenor Rick Margitza, flugel Scott Wendholt and the leader). Fedchock also shows his mastery of the Basie-style shuffle ('Big Bruiser'), samba ('Brazilian Fantasy'), bossa ('Eleven Nights') and big-band blues ('Blue After Two'). There are two ballads, with Fedchock's lyrical trombone showcased on the graceful 'Eclipse,' Scott Robinson's muscular baritone on the soulful 'Come Sunday.' As all of the soloists are excellent one hesitates to single any of them out, but Seaton is notably impressive on 'Tricotism' and (uncredited) 'Blues for Two,' as are tenor Rich Perry on 'Big Bruiser,' Wendholt and alto Charles Pillow on 'Brazilian Fantasy'—while Mark Vinci shines on alto flute ('Eleven Nights') and alto sax ('Blues for Two'). Others heard to good advantage are Margitza, Ratajczak and trumpeter Barry Ries (muted and open on the flashy 'Caribbean Fire Dance'), Ries again, this time on flugel ('Eleven Nights'), Pillow (soprano), Wendholt (flugel) and Perry ('Epistrophy'). Fedchock appears on every number except 'Brazilian Fantasy,' 'Epistrophy' and 'Come Sunday,' and each of his solos is a model of assertive craftsmanship and level-headed eloquence. No kidding, No Nonsense is assuredly the NYBB's finest album to date, remarkable in almost every respect, enhanced by topnotch recorded sound and a 71:09 playing time that speaks for itself. This is a review, not a critique, as there's really nothing here to criticize.