If a sextet--or a group of any size--is to be measured by the sum of its parts, trombonist John Fedchock's NY Sextet succeeds with flying colors, as it embodies half a dozen of the finest jazz musicians the New York City area has to offer. As we know, however, an inclusive appraisal rests on far more than that, else the musicians could simply set their instruments onstage and await the applause. Yes, musical talent surely provides an ...

Trombonist John Fedchock's fluid slide work, celebrated composing chops and arranger's ingenuity have been put to good use in settings both large and very small in recent years, with a big band set and two live quartet records dropping between 2015 and the present. But rather than choose one of those ensemble formats over the other this time around, he looks to a middle ground with his NY Sextet. Painting with a three-horn frontline and rhythm section, ...

After recording his quartet's splendid album Fluidity (Summit Records 2015), trombonist John Fedchock realized he had enough unused material in hand from that delightful concert date to consider releasing a second album. The more he listened to the music that hadn't made the cut on Fluidity, the more Fedchock was convinced that a second album not only could but should be produced comprising half a dozen songs that for various reasons weren't included on the earlier recording. “In some instances," ... 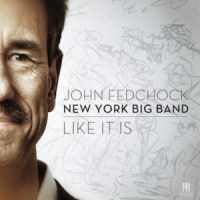 Trombonist, composer and arranger John Fedchock's New York Big Band has been in existence for more than twenty years, and the scintillating Like It Is is this group's fifth album. Fedchock, his band and this album have also garnered quite a few of this year's Grammys including “Best Large Jazz Ensemble Album," “Best Arrangement, Instrumental or A Capella" ("You And The Night And The Music"), “Best Composing" ("Ten Thirty 30"), and two “Best Improvised Jazz Solo" nominations, one for Fedchock ...

Worth waiting for--an expression that can be used to describe any number of life's pleasurable experiences: a memorable vacation, a sumptuous meal, a thrilling chance encounter --or even the fifth recording (and first in roughly eight years) by trombonist John Fedchock's superlative New York Big Band. Pleasurable it is from start to finish, with inspired blowing by the ensemble enhancing ten of Fedchock's exemplary charts. Whatever the premise or circumstance, Fedchock tells it Like It Is, and the band responds ...

Veteran trombonist and big band leader John Fedchock, has had a history of showcasing some of the finest contemporary ensemble music ever presented, and on the audacious Like It Is, keeps that tradition alive on the fifth album from his 16-piece New York Big Band. A group by the way, that has been around and swinging for over two decades boasting a personnel listing of all-stars and jazz luminaries which, have garnished the eventual Grammy nods with the four previous ...