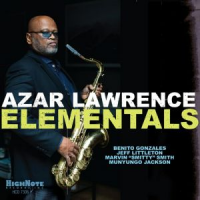 Azar Lawrence sounds more like John Coltrane than John Coltrane ever did. Well, almost. Mid-period Coltrane that is, post Atlantic Records and the sheets of sound, when Coltrane starting to record for Impulse with producer Bob Thiele. The closeness of the resemblance is longstanding and uncanny, but it has not been a cynical pose designed to maximise Lawrence's commercial appeal. He was 15 years old when Coltrane passed away in 1967 and by that time the older saxophonist had already made an indelible impression on him. Lawrence has sounded like Coltrane ever since he started recording, including during his spells with ex-Coltrane associates McCoy Tyner, Elvin Jones and Miles Davis in the 1970s. Each of these musicians also thought Lawrence was a ringer for Coltrane, in a totally good way.

The resemblance is particularly marked on the muscular and mellifluous studio-album Elementals. Lawrence wrote most of the tunes, and they are as clearly stamped with Coltrane's early 1960s tropes as is his saxophone style. Then there is a version of Rodgers & Hart's "It's Easy To Remember," which Coltrane himself recorded on Ballads (Impulse, 1963). The remaining three tunes were written by keyboard player Benito Gonzales, who has a more singular composing voice, but whose penchant for block chords cannot, in this context, fail to summon up Tyner. Only on Lawrence's Eastern-tinged "Solar Winds" does the music transition to a distinctly post-Coltrane aesthetic. That is not a criticism, though the track's success suggests it might be an avenue worthy of further exploration on a future album.

Lawrence's collaborations with Gonzales go back some time. Lawrence was a member of the sextet which recorded Gonzales's 2010 album, Circles (Furthermore Recordings), and in 2014 Gonzales was the keyboard player on Lawrence's The Seeker (Sunnyside Records). The presence on Elementals of Gonzales, who is of Venezuelan heritage, may be part of the reason for the South American undercurrent which runs through the album, and which is particularly apparent on Lawrence's opener, "La Bossa," and Gonzales's "Brazilian Girls."

Tapping into Lawrence's roots in spiritual-jazz as well as his fondness for ballads, Elementals is an unmitigated delight. It stands shoulder to shoulder with the superb 2017 Coltrane tribute The Late Trane (Edition Records) by British tenor saxophonist Denys Baptiste. This focuses on the often challenging work Coltrane recorded during the final two or three years of his life—pieces such as "Dusk Dawn," "Living Space," "Ascent" and "Vigil"—successfully searching out and developing the melodic beauty within them.

Two great albums, then, which in different ways mark the 50th anniversary of Coltrane's passing.