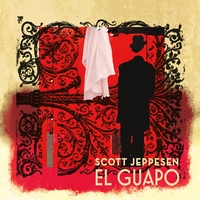 "Guapo" is Spanish for "sharp-dressed man" (or woman), and the title—and launch—track of Scott Jeppesen's exceptional solo debut sure conjures such an image. El Guapo is stylish, diverse and expert; released on Oct. 1, 2013, it is one of the best albums of that year.

Jeppesen is a protean saxophonist who also plays bass clarinet. A restless, inventive player, he delivers eight memorable originals, a resonant, intimate version of Richie Beirach's "Elm" and an effervescent take of Cole Porter's "Don't Fence Me In" that draws this fine album to a close.

The subtext here seems to be communication. Tracks four through seven bear titles referring to conversations, attitudes, and psychological deals. Take "Maybe Later," featuring Jeppesen on bass clarinet. The longest track on this worked, thoughtful disk, it starts ruminative and pretty, much like "Prayer for Sandy Hook" toward the end. But it evolves into something arch and witty as Jeppesen, the bass of Dave Robaire his underpinning, tosses the melody to John Daversa, a brassman—he's on flugelhorn here —of restraint and dramatically reluctant drive. Every solo purpose. Every solo, like Jeppesen's tone, is dry, too, even the ringing one by guitarist Larry Koonse.

Jeppesen switches to soprano sax for "No Drama," a tricky cut of slink and sass, a chamber-jazz bolero which showcases the rhumba talents of pianist Josh Nelson and sexy bass goading. Every tune has surprises; that's largely due to the startlingly crisp and detailed production of Jeppesen and Daversa.

The metrically demanding, funky "Overlapping Conversations," sparked by Dan Schnelle's elastic drumming, keeps the narrative going, building momentum and tension until Jeppesen and Koonse, whose doublings are one of the album's signature voicings, ties the bow.

And while each of the four tracks in this mini-suite within the album's broader framework stands by itself, they all seem to "talk" to each other. At the same time, while the album is sophisticated and Jeppesen's compositions refreshingly unpredictable, this cool dude of a disk never sacrifices accessibility on the altar of the abstract.

Jeppesen is a multi-instrumentalist at home in a variety of styles and settings. He's played with everyone from jazz artists Dave Koz to Maria Schneider, as well as the pop-rock guitarist Steve Millerand soul icon Stevie Wonder. While the pop and soul influences aren't prominent on "Guapo," the album always swings, and the musicianship is effortless no matter how mutable and challenging the track.

While "El Guapo" may not be the shape of jazz to come, it's jazz at its most shapely. Let's hope Jeppesen, his tone penetrating and spare, his improvisations compact and purposeful, his approach generous and intelligent, continues to deliver jazz of such exceptional quality.