EJ Park: Touching Us Softly with Her Song 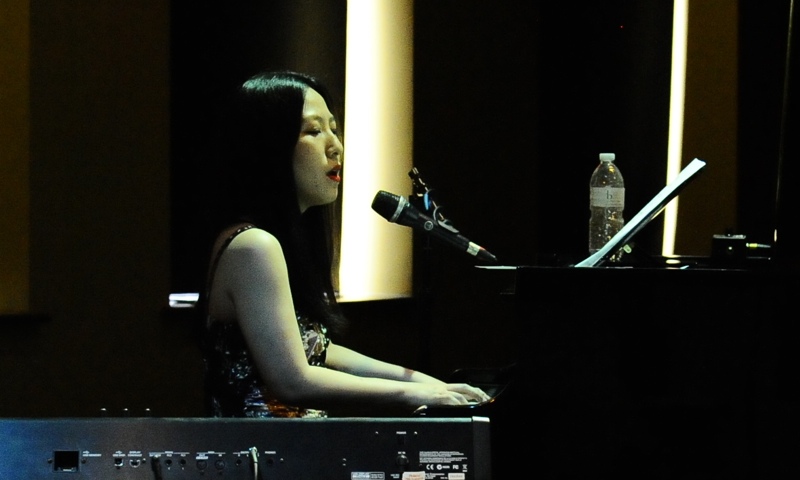 By VICTOR L. SCHERMER
April 24, 2014
Sign in to view read count
Her name is EJ Park. She's a young woman from Gwangju, South Korea. She disembarks from a plane in a city and country she's never been to before. She's a singer and pianist with a passion for jazz, and she's enrolled in the jazz master's degree program at the University of the Arts (UArts) in Philadelphia, PA, USA. She wants to be a successful vocalist. She doesn't know anyone, and no one here in the States ever heard of her. What next?

She gets moving. Bold, and with a taste for adventure, Park throws herself into her work and studies, starts getting some gigs, and soon people start noticing her. They hear the simplicity and beauty of her singing. They see her dedication to the music. They are moved by the way she turns a unique phrase on an old standard. Says Park, "You have to know what you want to do in life and persist at it. I listened to an African American jazz singer on television, and from that moment I knew that's what I wanted to do. I have to be strong and be the best I can be."

The singer on TV in South Korea was the great Cassandra Wilson. Such high aspirations and quiet confidence along with her liquid soprano voice and musical discipline are among the qualities that are already leading Park on a path to success.

Park was early introduced to music. Born three years after the 1980 democratic uprising in her home city, and while there was still tension in the air, Park recalls that "My mother sheltered me from the violence I saw on the streets. But she and my father really loved to listen to music. Every morning, my father played records: jazz, classical pieces. Then my mother took me to a pianist for lessons, so I learned classical piano when I was five years old."

A prodigious talent, she gradually found herself gearing up to be a concert pianist. But, in college at Jeonnam National University, she found herself increasingly dissatisfied with the straight-ahead discipline of classical performance, longing for ways to creatively express her inner feelings, and acquiring a taste for singing. Only at her mother's urging did she complete her piano studies, doing so with panache. But that epiphany from listening to Cassandra Wilson stuck with her, and she sought the guidance of Malo, a Korean jazz singer who recommended she enroll at the Dong-Ah Institute for Media and the Arts (DIMA) for jazz studies. Soon thereafter she found an inspiring teacher, Sunny Kim, an avant-garde vocalist who had worked with the trombonist Roswell Rudd and was the first Korean to sing at the Newport Jazz Festival. Kim encouraged Park to study in the United States and walked her through the necessary skill assessment, and soon thereafter the aspiring jazz singer came to Philadelphia's UArts.

In the two plus years since then, Park completed her masters and was instantly hired as adjunct vocal faculty, joining the likes of Anne Sciolla and Mary Ellen Desmond. Beyond those achievements, and at last fulfilling her dream, she has been a busy vocalist and pianist, with over eighty nightclub gigs to her credit, and gospel singing tours with top Korean ensembles.

Sensing her enormous talent, her teacher and mentor, pianist Don Glanden, Head of Graduate Jazz Studies at UArts, brought her on board as vocalist with his acclaimed trio, and she has been a big hit with them at places like the Sullivan's Steak House in Delaware, the Azure Room at the Revel Casino in Atlantic City, the Ubon Thai Restaurant in Wilmington, and the Paris Wine Bar in the Fairmount section of Philadelphia. Robert and Benjamin Bynum, the legendary music entrepreneurs who founded the top Philly clubs Warmdaddy's and Zanzibar Blue, have booked her for their new establishment, the Paris Bistro and Jazz Café, in Chestnut Hill. When people hear her, they want her back. Says Glanden, "It's hard to find a young singer who is as resonant with the listeners and as dedicated to jazz as EJ. People hear an extraordinary level of honesty in her singing, a real desire to communicate. I booked her with bassist Bruce Kaminsky on an off night at Sullivan's, when folks are usually there to eat and drink, not listen, yet everyone was applauding, filling up the tip jar with bills, and people didn't want her to stop singing, they loved her so much. The level of honesty of her singing really reaches the musicians and the audience alike."

There are two basic ways for a vocalist to transform a tune into a living jazz performance. One is to embellish it with scat and variations, twists, and turns of the words, inflections, melody, and chords. Ella Fitzgerald represented the quintessential manifestation of that approach. The other way is to stick almost literally to the tune and bring out the nuances and emotions inherent in it. Chet Baker, the iconic trumpeter who doubled as a vocalist, achieved cult status for the way he could infuse meaning, emotion, and his own persona into a simple rendition. Two of Park's favorites, Billie Holiday and Shirley Horn, achieved immortality by making songs talk to the listener in an almost telepathic way. This is the way that Park chooses. She calls it a "minimalist" approach, using as little gunpowder as possible to get the longest distance out of a song. She does it better than almost anyone else who has come around the circuit in recent years.

Take the way she does the classic "Good Morning Heartache" made famous by Billie Holiday's recording, which leaves the listener almost devastated by its inherent sadness, a sorrow which Billie herself knew all too well. In a YouTube version with Glanden's trio, Park is cooler about it than Billie, but the feeling comes across anyway. She's more like an empathic friend than a jaded lover, but the feeling resonates inside you, and it brings you close to tears, because you've been through it yourself. The emotion is evoked by the slight expressive changes in her voice and the way she extends the notes until they go out into space. Then too, the sheer beauty of Park's voice mirrors the meaning of the song like the moonlight reflected on a clear lake. Her rubato rendition of "My Funny Valentine," where she accompanies herself on piano, gives her more of an opportunity to vary the phrasing, adding just a touch of scat, while as self-accompanist she achieves the sensitivity of one of her favorite pianists, Bill Evans, in the way she comps with slightly dissonant impressionist chord changes. The emotion builds and the pitch rises to a point of cathartic pathos followed by a sense of inner peace.

When Park takes an upbeat standard like "Bye Bye Blackbird" or does a lively bossa nova twist on "You Don't Know What Love Is," you hear her precise yet laid back mastery of the jazz idiom. The swing, the rhythmic pulsation, the holding back to make a point, with which more mature vocalists still struggle, is already "in there." She's mastered these nuances without resorting to the "jive" concoctions that some singers consider their "signature." Park takes the tune on its own terms, makes it speak for itself, and, as a listener, you end up forgetting time and place, absorbed in the song. In that respect, she's like one of her favorite instrumentalists, saxophonist Paul Desmond, who compared his sound to a dry martini. With Park, as with Paul Desmond, you get it straight up, but you become intoxicated.

So, what's on tap for this gem of a vocalist, who is already working the circuit and having a strong impact on her peers, sidemen, and growing fan base? Her own goals are modest and already being fulfilled every time she performs: "I want to talk when I sing, and make the people feel happy and help their minds heal. I want to touch their minds with my singing." Her audiences and varied sidemen will guide her into new territories and musical adventures, bringing out aspects of her singing she didn't even know were there. With all that may come frustration, problems of fame and money, perhaps even manipulation and seduction by agents and record companies. There has hardly been a great jazz singer who hasn't gone down those rough roads. But Park, like Ella Fitzgerald and Cassandra Wilson, seems to have an emotional maturity and resilience that will carry her through untainted by these vicissitudes.