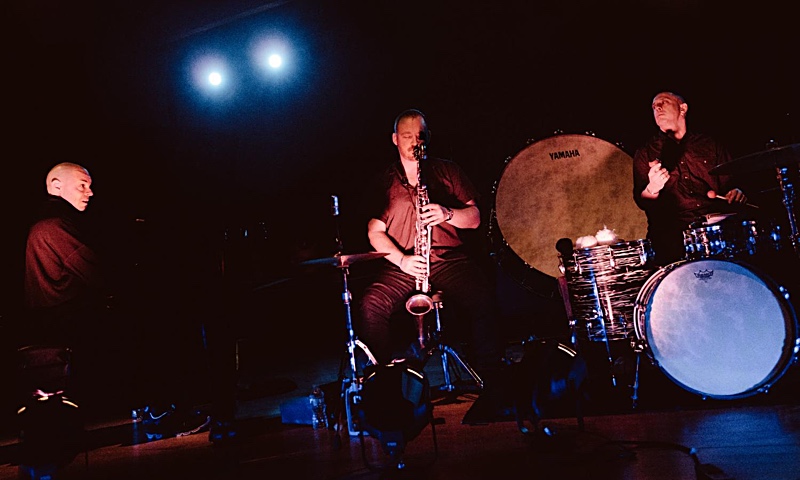 Music has been a comfort in troubling times ever since there were humans to bring about troubles to begin with. Rare, however, is that music which seeks not only to placate but also demonstrate. The world of ECM Records, insofar as it has come to be defined through nearly five decades of mapping, demonstrates in every sense of the word by: proving that genres are as fluid as the identities of those shaping them, illustrating music's potential for both protecting tradition and breaking it, manifesting emotions that might otherwise remain hidden, and, above all, taking part in a larger conversation between performers and listeners. The latter dynamic was on full display throughout 2017's NYC Winter Jazzfest, for which ECM claimed a stage at the New School's Tishman Auditorium.

The overarching theme of the 2017 Jazzfest was social justice: a corner piece of ECM's puzzle, which has always been about the power of cumulative experience. In that vein, and in contrast to 2016's label showcase, this theme played out consistently as a measure of growth through time. Each of the evening's five concerts, apart from the last, seemed to search for its heart, feeling its way through the uncertainties being collectively faced as we listeners sat on the cusp of a new political era, for better or worse. Seeking out footholds in this unstable terrain, these musicians worked their way toward safer havens at the end of each set.

Bassist Michael Formanek and his quartet with saxophonist Tim Berne, pianist Craig Taborn, and drummer Gerald Cleaver set in the tone in the above regards, plying an assortment from the 2012 album, Small Places. Common to Formanek's writing is a downright Buddhist sensation of near-collapse that willfully treads the edge of certainty. Whether in the aptly titled "Wobble and Spill" or metaphysical acrobatics of "Rising Tensions and Awesome Light," his gift for crafting melodies that feel more like living bodies than static themes stands alone. The concert's opener, "Pong," highlighted individual strengths. The bandleader's bass bent and flexed with humble agility; Berne's alto lit up the dark, even as it dimmed the light; Taborn approached the keys with metallurgical precision; and Cleaver evoked quiet surf and urban sprawl at the kit. Formanek displayed a certain fondness for the octave, from the door of which his bandmates pulled their points and lines. It was exciting to witness the bifurcation of the band's forces, which took one form in Formanek and Berne, another in Taborn and Cleaver. Each yinned the other's yang with straightforward commitment. Most impressive, however, was the way in which the entire quartet came together in the final improvisation, which rendered a modal theme with grit and finesse.

From these intensities arose the quiet mountain of Danish guitarist Jakob Bro. His trio with bassist Thomas Morgan and drummer Joey Baron delighted with selections from Bro's first two ECM albums as leader, Gefion and the trio's own Streams. Over the next hour of soft-footed loveliness, Bro fed a Bill Frisell-like flame, which flickered in the currents of the music's slack, lyrical waves. Morgan ascended and descended his bass like some grand chromatic ladder, while Baron connected constellations for Bro's divining pleasure. Whether flowering through rubato strains or, in one of the evening's most visceral transformations, pushing through the igneous rock of closer "Sisimiut," Bro showed himself eminently capable of capturing and expanding moods. That latter tune, a Bro original named for Greenland's second-largest city, evolved into a scenic train ride that lingered long after the final note.

After this misty atmospheric shift, the articulations of saxophonist Ravi Coltrane and pianist David Virelles fell into crisp relief. Despite having played together in larger contexts since 2011, this event marked their debut as a duo (and plan to record as such for ECM in 2017). Presenting a varied program of originals, standards, and freer ventures, the duo traversed moods ranging from balladic and philosophical to sprightly and childlike. Coltrane is an adept player across reeds, but his sopranino playing is special. This highest of saxophones can easily sound like a toy in the wrong hands, but in Coltrane's glistens like the freshest fruit just picked from the vine. In one of the most brilliant portions of the ECM showcase, he improvised with Virelles, who with mallets struck the marímbula that doubled as his piano stool. Even at their quietest, Coltrane and Virelles danced to the inertias of new possibilities.

As if squaring a circle, Bill Frisell took the spotlight, welcoming Morgan for a different sort of duo. Playing selections from their as-yet untitled album—to be released in May of 2017—and moving through the changes with kindred humility, guitarist and bassist brought requisite twang and rural charm to their unfolding. Smooth melodies quickly turned into gnarled roots, while looser grains were shaken into interlocking rhythms. After the intensities of its predecessors, this set felt rather underwhelming. Despite Frisell's legendary status, it was Morgan who had the most to say in their sonic conversation. As with each set that preceded it, their last tune, a beautiful take on Paul Motian's "It Should've Happened a Long Time Ago," was also their strongest. In their hands it seemed like nothing less than a family heirloom dusted off and held to the sun. With a sometimes-distracting array of digital loops and delays, Frisell rebuilt broken memories in a fitting tribute to one of jazz's greats.

Even more impressive, then, that the night should end on a whole other plain as pianist Nik Bärtsch's Mobile—which boasts the further talents of bass clarinetist Sha and master percussionists Kaspar Rast and Nicolas Stocker—dazzled with their precision. Their performance, all-acoustic and without break, lifted the bar high. Though the band had played in NYC just last year at the Rubin Museum, here they were just as fresh, more compact and playful. They dipped their oars into the waters the moment they took their seats. Soft bass drum hits, bowed cymbals, and gongs held the foreground while Bärtsch pinpointed stars in the backdrop. Snaking lines from Sha—whose displays of circular breathing were nothing short of, well, breathtaking—and the bandleader's delicate propulsions gave Rast and Stocker just the incentive they needed to find careful purchase. Bärtsch, per usual, found creative ways to exploit the piano's inner body, striking, muting, and strumming its frame and strings with a master storyteller's gift for color. As manifested in the occasional dramatic moment, including a satori-inducing crash of bass and cymbal that startled nearly everyone in attendance, Bärtsch's trajectory was all about the profundity of decay. Stocker's tuned percussion was a reminder of the through-composed exactitude of the sounds, but also the room for variation within it. This "mobile," then, was not perpetual, but one whose ephemeralness was underscored by its grasp of eternity.

In the end, this was an evening that will likely remember us more than we it. But that's okay, because music is one of the last genuine repositories for all that disturbs us, purified by the unpredictable, and is living proof that unity coheres through independence. And as we move forward, if not backward, into one of the most divisive improvisations in political history, we do well to remember that art is not only reactive but, as ECM continues to show us, also proactive. So should we be, too, holding signs to our hearts as those with power hold trembling hands to theirs.