By Mark Sullivan
January 23, 2017
Sign in to view read count 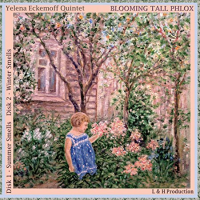 You can look up the phlox flower online: there are 67 species, many of them fragrant. But none of the photographs or botanical classifications will tell you how it smells. For that we have pianist/composer Yelena Eckemoff's musical impressions here, along with a range of other smells recalled from her Russian childhood. When Eckemoff visited Finland and saw how much it reminded her of Russia she decided it was the best place to record an album about her Russian aroma memories, and recruited a Finnish band to realize her vision.

Trumpeter Verneri Pohjola is known for a series of recordings for Germany's ACT label; drummer Olavi Louhivuori for contributions to ECM albums with artists including Tomasz Stanko and Mats Eilertsen. Vibraphonist Panu Savolainen and double bassist Antti Lotjonen are rising stars in Finland, poised for broader recognition. The instrumentation is unique in Eckemoff's discography. The closest match would be A Touch of Radiance (L&H, 2014), a quintet with saxophone and vibraphone.

The title tune (the cover painting depicts the composer smelling the flowers in her grandparents' garden as a child) is an atmospheric opening, its musical impressionism mirroring the visual image. But "Apples laid out on the floor" transitions into fast swing (a feature for the vibes, as well as a lyrical bass solo)—an early sign that not everything will be colored in pastel shades. "Baba Liza's Singer" has several sections, including one featuring a trumpet solo. This is typical of Eckemoff's compositional style: she tends to set up a structure that determines the flow of the pieces. There's a strong role for improvisation, but the overall shape of the performance is more compositionally directed than is common in jazz. Her players all seem to embrace the challenge, so there is never a sense that they feel trapped. In pieces like "Sleeping in the tent" and "Pine needles warmed by the sun" there is even a feeling of collective group improvisation.

The two-disc set is divided into Summer Smells and Winter Smells. I'd have to say that I did not feel a chill during the Winter sequence. But that's the nature of musical impressionism, except in those rare instances where a natural sound is being directly imitated musically (e.g. a train whistle or a police siren). I do wonder about the books contained in "Grandpa Lera's bookcase:" there's a definite Spanish atmosphere that creeps in. Eckemoff's piano playing is a big part of the sound, of course. She tends to give more solo space to her guests, but she has plenty of shining minutes as soloist, as well as providing important musical glue holding the arrangements together. She is definitely a jazz pianist now, and it may be just the power of suggestion hearing evidence of her classical training. This 2017 release was recorded in September, 2013, and there is no doubt that this musical explorer has already moved on.