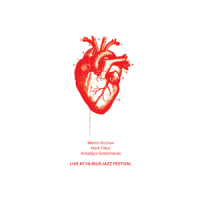 Swedish reedman Martin Küchen made three appearances at the Lithuanian capital's annual jazz bonanza in October 2015 which included a solo concert and an outing with his group Angles 9. But the set which the NoBusiness label has chosen to release, as a limited edition LP, is his first time meeting with the Ukrainian pairing of bassist Mark Tokar, who may be familiar from Ken Vandermark's Resonance Ensemble, and drummer Arkadijus Gotesmanas, now based in the Baltic country. Each side contains a single piece improvised as accompaniment to a 1925 silent film adaptation of Arthur Conan Doyle's The Lost World.

That may explain some of the sudden changes in trajectory which otherwise seem somewhat random from a purely musical perspective. Perhaps the most stark example comes in "Part II" when, after an intermittently pulsing passage with rumbling drum cadences and Küchen's tenor saxophone mutterings and croaks, Tokar initiates a sharp swerve of direction. He introduces a perky pizzicato figure while Küchen switches to brightly-hued dancing flute, which sounds nearly conventional in comparison to the heightened intensity and emotionally charged drama he creates through controlled overblowing and distorted notes in his horn work elsewhere.

Tokar excels at spare woody counterpoint, but also asserts the rhythmic impetus through reiterated phrases and extemporized riffs, matched by Gotesmanas' percussive tone color manipulation and the resultant propulsive embellishments and patterns. Together they expand and contract what almost feels like time keeping, as early in "Part I" where they suddenly launch into a dashing canter, prompting Küchen to respond by moving from flute back to alto for meaty varied conversation of groans, sighs and shrieks.

It confirms that the most compelling moments come with Küchen on saxophone. At such times, the reedman's broad vibrato and melodic fragments hold just a hint of those aching lines he deploys with tune orientated outfits like Angles and All Included. Towards the close of the second side, Küchen pitches his impassioned hooting against the jaunty lope of bass and drums, thriving on the slow burn, before a brief but unexpected coda for flute completes this lively but occasionally perplexing recital.