By KARL ACKERMANN
April 3, 2019
Sign in to view read count 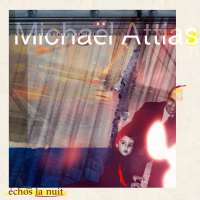 In the early days of Rahsaan Roland Kirk's career, there were critics who viewed the blind man with three instruments hanging from his neck—two to be played simultaneously—as posturing. Then they heard him play. Forty years later, and filtered through the influence of four continents, Michael Attias takes up the task of improvising on two different instruments at the same time, without overdubs or enhancements. Primarily known for his saxophone, Attias is also an accomplished pianist and on this album he dedicates a single hand to each instrument.

Attias was born in Israel, grew up in Paris and spent time in North Africa before settling in New York City in the late 1990s. He has worked with Anthony Braxton, Paul Motian, Anthony Coleman and Tony Malaby. Attias' recent work with his namesake quartet features the all-star support of the great Cuban pianist Aruán Ortiz, drummer Nasheet Waits and bassist John Hébert. Music from the trio Renku (with Hébert and drummer Satoshi Takeishi) could not be more different from échos la nuit. That trio recording, Live in Greenwich Village (Clean Feed, 2016), is a blistering set of improvisations, closer in style to Attias' Spun Tree quintet featuring Ralph Alessi, Matt Mitchell, bassist Sean Conly and Tom Rainey. Compared to those albums, and the overall body of Attias' work, the latest album is an exercise in quiet experimentation.

"Mauve" opens up a set of twelve compact pieces; a beautifully melodic example of circular breathing with piano harmony. The role of Attias' instruments is reversed for "Trinité" where piano figures are accented with the alto. Fleeting motifs are common throughout the collection being the dominant structure in "Fenix III," "Rue Oberkampf," "Autumn I" and "Autumn II," the latter being embellished with a deep, soulful sax improvisation. Attias' takes us through several alternate experiments with the tonal exercises of "Grass," the extended saxophone technique on "Circles" and the piano abstractions of "Wrong Notes."

Whether Attias is scattering piano melodies, fluttering, or weaving serpentine lines on the alto, he is presenting accustomed and unfamiliar sounds concurrently, sometimes inside-out. Pieces that rely so heavily on repetition also depend on finding points of recovery along the way. What makes Attias' pieces different is that each is interested in transformation as much as recapturing a theme. For all the music's minimalist qualities, it is complex beneath the surface and best rewards careful listening.