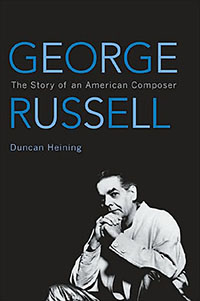 It's been out for a couple years now, but any book about American composer and founder of the Lydian Chromatic Concept of Tonal Organization—if not the most influential musical concepts ever written and applied to jazz, then certainly one of them—warrants attention. That it is as painstakingly researched and compiled by author (and occasional AAJ contributor) Duncan Heining—a UK-based writer who was fortunate enough to have befriended Russell in the latter part of his life, initially, no doubt, the result of deciding to take on this massive project, but ultimately bearing greater fruit, both for the project and beyond—only gives George Russell: The Story of an American Composer greater credibility, as Heining was able to uncover things that more distant writers could not.

Russell is one of those American artists who may be felt more than actually known to many jazz fans, and heard indirectly through the application of his concept rather than his own music, though he released no shortage of fine and, in some cases, truly groundbreaking recordings over the last half of the 20th century and into the new millennium. He's certainly far from a household name, despite coming up during the emergence of some of jazz's most prominent artists of the 1940s onwards, rubbing shoulders with everyone from trumpeters Miles Davis and Dizzy Gillespie (even giving the bebop progenitor the well-known "Cubano-Be, Cubano-Bop") and saxophonists Gerry Mulligan and Charlie Parker, to pianist John Lewis. He was part of the group of musicians who would congregate at composer/arranger Gil Evans' apartment to discuss music, play music and theorize about its possible future—also, at one point, used his own home as a similar gathering point.

But whereas most musicians work their theory in order to play and compose, Russell's life was, once he found it, dedicated to his Lydian Chromatic Concept, and virtually everything he did, from recording and composing to band leading and performance, was in service of the Concept. Few artists in the history of music, let alone the history of jazz, have been so single-minded. But if this sounds at all monolithic, what Heining helps to clarify in The Story of a American Composer is how expansive the Concept was—and is, as it remains a touchstone with artists ranging from trumpeter Randy Brecker and British pianist Howard Riley, saxophonist Jan Garbarek and guitarist Terje Rypdal.

These latter two Norwegian artists are particularly significant, as Russell was one of many African American artists who, after a particularly complex childhood impacted by illness and the racial divide in pre-1960s America, chose to emigrate to Europe, where there was less prejudice and greater acceptance. Russell's "finding" of Garbarek and Rypdal along with bassist Arild Andersen, drummer Jon Christensen and Swedish pianist Bobo Stenson—all destined for greater fame through their now lifetime affiliation with Manfred Eicher's German ECM label—was particularly significant, as was his ability to find other sympathetic folks in various organizations in the two Scandinavian countries, all of which led to a discography that has recently been collected by Cam Jazz into an eye-and ear-opening nine-CD box set, The Complete Remastered Recordings on Black Saint and Soul Note (2011).

Heining follows Russell's life and career, from his early days being an adopted child in depression-era America, through to his final challenges (and more than occasional triumphs) and ultimate acceptance as one of the most significant contributors to the pure language of jazz. He addresses the challenges Russell had in getting his Concept accepted—after all, this was a lofty, rather intellectual set of ideas that, in printed form (and through its multiple iterations) remains dense and, for many, unfathomable. Still, Russell's Concept became adopted more through practice, and over the course of his career he worked with artists ranging from pianist Bill Evans to modern players that include, along with Brecker, guitarists David Fiuczynski and Mike Walker, saxophonist Andy Sheppard, trumpeter Palle Mikkelborg and bassist Steve Swallow.

While Heining is obviously a devoted fan, that doesn't mean he sugarcoats anything. Russell could be a difficult man—as is so often the case with those driven by a singular vision—and his numerous relationships over the years paint a picture of a solitary being, at least until he met his third wife Alice in the 1970s, a woman who, by taking over the business side, was in many ways responsible for the continuance of his career and recordings. He was not exactly monogamous in his early life, yet despite a relationship that did not come to fruition, Sheila Jordan holds no malice, as Russell's recruitment of the young singer for a moving and unexpectedly deep arrangement of "You are My Sunshine," ultimately released on The Outer View (Riverside, 1963), helped kick-start her career.

It's a complex book with a great many threads, and Heining's meticulous and exhaustive research, right back to Russell's youth, makes The Story of an American Composer an engaging, educational and entertaining read that not only draws the threads of Russell's together, it positions them in the greater context of jazz's evolution, in particular during the 1940s, '50s and '60s.

There is only one place where the book lags a tad, but looking at the entire picture, it was almost inevitable. After wrapping up Russell's life in the penultimate chapter, Heining devotes the final one to an in-depth discussion of the Lydian Chromatic Concept of Tonal Organization—its merits, its flaws, its acceptance and rejection, its broader context. Heining even goes so far as to bring elements of psychology, sociology, physics and other disciplines into the mix, in order to demonstrate that Russell's Concept was more than simple music theory. As with Russell's Concept, this is a dense chapter, and while such discussions might well have been better placed, contextually, throughout the entire book, Heining made the right choice in delineating it into a separate chapter. Whether or not the reader has the wherewithal to grasp what Heining does with the final chapter, the biographical portion of the book—nearly 300 of its 376 pages, and the final 50 pages are devoted to appendices that include an exhaustive discography, tour dates and bibliography. And if nothing else is learned from the final chapter (and there's plenty), it's a quote from Ben Schweinder, a Russell collaborator and teacher of the Lydian Chromatic Concept at the New England Conservatory:"The Concept is not a 'paint by numbers' sort of concept. It ultimately puts 100 percent responsibility for creativity on you. That's not to say that analysis of what's already been done doesn't play an important role in learning the Concept—it's that conceptual analysis uncovers the tonal resources a composer/improviser employed in his or her work and how tonal gravity is being manifested. Any system can be identified, if one chooses, after that. All systems and methodologies, within equal temperament, are embraced in the Lydian Chromatic Concept. The Concept simply offers an objective organization of all the tonal resources (melodic and harmonic) available. It's up to the musician to arrange or combine any selection from these elements in a way that fulfils the creative aim of whatever music is trying to be created. You can either choose from a methodology, or you choose from natural elements and create your own 'methodology' or 'system.' Choosing from natural elements and their 'modes of behavior, as George puts it, allows for direct access to your own essence. George mentions 'essence' a lot. I think what he's referring to is that unified core of your being that expresses one's individuality.

An overdue, complete and comprehensive look at an American jazz legend, whose recognition may not have been as great as he deserved, but which mattered little as Russell's overriding concern was the Concept—always the Concept. George Russell: The Story of an American Composer is an essential read for anyone looking to not only understand George Russell's life and times, but how this one man literally changed the landscape of jazz, and whose Concept remains an integral part of its ongoing evolution.