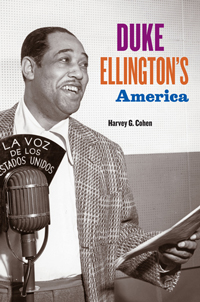 Dozens of books in print about Duke Ellington portray him as the pre-eminent composer of the 20th century, who led his orchestra for an amazing 50 years and possessed a percussive, dark-clustered piano style that influenced everyone from Thelonious Monk to Randy Weston. This meticulously researched and elegantly written book, by British cultural historian Harvey Cohen, with all of the Ellington archives at the Smithsonian Institution at his disposal, details the ever shifting artistic, musical, racial and social tides that Ellington encountered during his fabled career.

The result is an engaging work that makes Ellington's art even more impressive, given the myriad of obstacles he faced. The book, according to the author, seeks to show how Ellington mediated the tensions between popular and serious American art, intellectual and popular culture, creativity and conformity, democracy and communism, and especially between blacks and whites. Through his actions and his work over a half century, writes Cohen, Ellington changed American culture, transforming the nation's cultural and racial landscape.

Although not a strict biography, Cohen's book follows Ellington's familiar biographical chronology. In recounting his ebullient, middle-class, African-American upbringing in Washington, D.C., Cohen shows how the philosophies and opinions of black leaders like Booker T. Washington, Carter G. Woodson and W.E.B. Du Bois provided the positive themes of racial pride, personal elegance and group empowerment that were taught at home, and in schools, and which Ellington incorporated in many of his works, from "Sepia Panorama" to "Black, Brown and Beige." In addition to that formal education, Cohen also unveils the informal "street knowledge" Ellington received in the city's pool halls where hustlers, scholars and doctors would interact, as well as the priceless musical education he got from pianist/teacher Oliver "Doc" Perry, whose instructions in European harmony, as well as the blues and other black musical genres, would be crucial in the formation of Ellington's "beyond category" artistry.

It was in the hot house of the Harlem Renaissance of the early 20th century where Ellington would find his fame, and Irving Mills, his greatest manager, but a most controversial figure. While Ellington was musically articulating the cultural imperatives of Alain Locke's New Negro Movement, that symbolized the incredible artistic outpouring of the Renaissance, Cohen shows that Mills' expert and crafty marketing of Ellington as a serious composer, rather than a run-of-the-mill Cotton Club bandleader, by in large worked. "The publicity," Cohen writes, "maintained that Ellington uplifted as well as entertained audiences. Such strategies shielded Ellington and the orchestra from the degrading contemporary images of Jim Crow discrimination."

Mills' management allowed Ellington to subvert the racism of the day; but at a price. He credited himself as a "co-writer" to a number of Ellington compositions, and was increasingly dictatorial towards Ellington regarding the commercial direction of his music. The break came in 1939, when Ellington walked into Mills' office, examined his books, and severed their relationship. That said, Ellington continued and perfected Mills' marketing ploys throughout his life, which made his groundbreaking concerts like his famous 1943 Carnegie Hall concert, and his 1960s/70s US State Department tours possible. But even though he was unquestionably a "race leader," Ellington refused to participate in the era's civil rights protests until the 1960s. Cohen details the damage that the infamous "We ain't ready yet" misquote, attributed to Ellington in a black newspaper in 1951, that alleged that the bandleader implied that blacks weren't prepared for integration, did to his reputation, even though Ellington told a reporter that he wrote a composition "Black Beauty" in 1928.

Cohen deals with other Ellingtonian challenges: his surprisingly less-than-friendly dealings with his aide-de-camp Billy Strayhorn, the Pulitzer Prize snub, Ellington's struggles against ageism, and his fight against nostalgia—the constant temptation of fans and critics to compare the bandleader to his earlier work and overlook such late masterpieces like The Far East Suite (Sony Music, 1967), The Second Sacred Concert (Prestige, 1968) and The Afro-Eurasian Eclipse (Fantasy/OJC, 1971). Cohen conclusively proves in this work of swinging and scintillating scholarship that through negotiating and navigating America's musical and cultural minefields, Duke Ellington managed to "transform his nation's historical, racial and cultural landscape as he contributed to creating its musical heritage."