BY DAN BILAWSKY
February 24, 2012
Sign in to view read count
In numerology, eleven is said to be a master number, capable of representing those who inspire and lead, often achieving greatness in the process. Charisma and an intuitive way of thinking frequently underscore the thought-process of eleven-oriented individuals, helping to lead them to success in their chosen paths.

With these thoughts in mind, it seems almost fitting that two exciting records from high-profile drummer-leaders have titles that take the number eleven as their theme. While Tommy Igoe and Jonathan Blake are very different beasts behind a kit, they both share an understanding of what it takes to create music that's artistically satisfying, while still remaining accessible and interesting to audiences of different shapes and sizes. 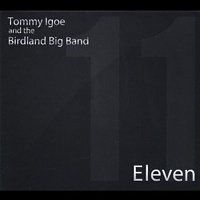 Igoe's Eleven, which features eleven tracks that serve as an overview of what he does with the Birdland Big Band on a weekly basis at its namesake club, became available to club patrons on that wondrous date of 11/11/11. Now, with a wider release, the album is bringing more attention to the drummer and his regular wrecking crew of a band that helps him to set Birdland ablaze on Friday afternoons.

The songs on the record are all part of the rotating playlist that keeps people coming back to the club without risk of hearing the same set twice, and Igoe was shrewd in his song selections for this date. While the band has some well-known literature in its book, Igoe skips the warhorses here, save for a take on Bobby Timmons' "Moanin'" that features guest harmonica player Rob Paparozzi and bassist Tom Kennedy, and focuses on material that doesn't get the big band treatment very often, if ever.

The band gets funky when addressing the work of the Brecker Brothers ("Spherical"), back saxophonist Nathan Childers on a number that has become his ballad signature ("Common Ground"), and revel in the opportunity to do something new with the work of Herbie Hancock ("Butterfly"), Don Grolnick ("Uncle Bob"), and several others.

While all styles are fair game for exploration, this band has developed a strong reputation for its sizzling Latin skills, and Igoe made sure to include a few choice numbers that show it. Chick Corea's "Armando's Rhumba," which features Childers' soprano work, Kennedy's bass playing and Barbara Cifelli's baritone saxophone, and a Paquito D'Rivera-arrangement of "Alma Llanera" give listeners at home a little taste of what they might experience when the band holds one of its rare "Latin nights" in the club. While no recording—for any group—can ever substitute for the up-close-and-in-person experience of seeing a live performance, Eleven does a good job of condensing Igoe's energy and the band's personality into a single CD package. 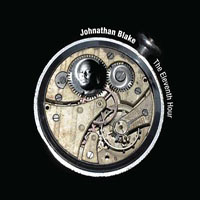 "The eleventh hour" is a phrase that usually surrounds the idea of getting something done at the last minute, but this album is anything but a half-assed rush job. The Eleventh Hour is an expertly crafted program of music that features a cutting edge dream team of a line-up and highlights the leader's dual talents—drumming and composing.

Blake's picture, looking out from the cogs and wheels of the watch mechanism on the album cover, is both imposing and confident, and both of those qualities are apparent in some of this music. He takes an aggressive, post-modern stance, with some help from saxophonists Jaleel Shaw and Mark Turner, during "Of Things To Come," gives an Eric Harland-esque backing to the exciting and lengthy "Free Fall," which features a strong piano solo from Kevin Hays, and uses the musical DNA of pianist Thelonious Monk and and saxophonist John Coltrane to create something new. "Clues" is Blake's dizzying take on Monk's "Evidence," albeit done backwards, upside down and with some alterations, and "No Left Turn" takes shape around a 12-tone row that Coltrane used on "Miles' Mode."

While the core quintet, with a two saxophone-plus-rhythm section format, is behind much of the musical magic here, some notable guests up the ante. Robert Glasper provides slick Fender Rhodes on the title track and has some great interaction with guest harmonica ace Gregoire Maret on the absorbing "Canvas," and tenor saxophonist Tim Warfield makes the most of his lone appearance, as he heats up the atmosphere on "No Left Turn." Blake often finds himself working as a sideman for trumpeter Tom Harrell, but this time their roles are reversed. Harrell's inimitable playing proves to be a highlight on his own "Blue News" and the drummer's "Time To Kill" suggests it's a shame he did not stick around for a few more tunes.

Nine of the ten numbers on The Eleventh Hour come from the pens of the participants, but the one exception is the beautiful "Dexter's Tune." This Randy Newman number stands apart from the rest of the album, as it puts pure beauty above all else, and it also proves to be a link between Blake and Igoe. While this tune didn't make it onto Eleven, it happens to be one of the breathtaking ballad showstoppers in the Birdland Big Band book, proving that great minds—and great drummers—think alike.