BY ALAIN DROUOT
September 27, 2019
Sign in to view read count 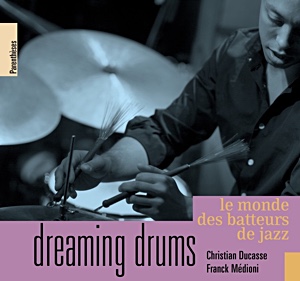 To celebrate 40 years spent documenting jazz, French photographer Christian Ducasse decided to focus on drummers—the first time those timekeepers receive such an honor. In this endeavor, he partnered with Franck Médioni, a French journalist and longtime contributor to Jazz Magazine (1995-2009) as well as a producer for the radio station France Musique (1995-2014), whose text is peppered throughout the book.

Ducasse has worked mostly as a freelance photo-journalist and has been published in countless publications, his longest stint being with the daily Le Monde. He was still a student when his first picture, featuring Art Blakey and The Jazz Messengers caught in Châteauvallon, was published in a local newspaper, La Marseillaise, in 1979. Dreaming Drums serves as an excellent retrospective spanning the photographer's entire career—the oldest picture dates from April 1980 (Max Roach at Festival Jazz Open in Cap d'Agde) while the most recent was snapped in April 2018 (French drummer Fred Pasqua at Le Jam, a jazz club in Marseille).

The book does not aim at presenting a pantheon of modern jazz drummers. The selection is the result of careful decisions informed by the quality of the shots (all in black and white): their visual impact, their attractiveness, and their personal significance for Ducasse—chances are one might not find one's favorite drummer. Nevertheless, this is not a reason to miss an opportunity to discover musicians who not often in the spotlight, such as Ulysses Owens, Jr., Justin Faulkner, Jimmy Bennington, or Gene Calderazzo, pianist Joey's lesser-known brother who is London-based and often backs saxophonist Pharoah Sanders when he tours Europe. Also included are more than a dozen French drummers including Magma's Christian Vander—quite a few jazz musicians moved through the ranks of the prog rock outfit.

The variety of shots underlines Ducasse's knack for catching drummers at the right moment: While some photos are clearly staged, others caught the artists in the middle of a performance or candidly at home, or in a green room. To better underline the book's purpose, some photos deliberately keep the drummer out of the frame while a few sequences (Elvin Jones, Muhammad Ali, or Idris Muhammad) attempt to capture the musicians in motion lest we should forget that they are usually the most interesting performers to watch on a bandstand.

The book was conceived on the premise that the drums are jazz's seminal instrument. In his non-linear prose (in French), Médioni switches back and forth between jazz history, and how it was influenced by the evolution of drumming, anecdotes, testimonies, quotes, and a few key profiles (Milford Graves, Max Roach, Kenny Clarke, Roy Haynes, and Papa Jo Jones). Beyond the drums and their practitioners, text and photos provide a balanced and much enjoyable overview of the jazz world in the late 20th century and at the dawn of the 21st.

Jazz writer and radio host since 1999