By Jeffrey Uhrich
February 4, 2014
Sign in to view read count 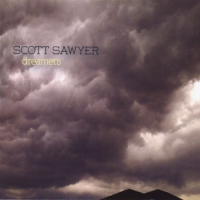 With a warm and inviting sound, guitarist Scott Sawyer offers an intriguing and engaging collection of songs in Dreamers, his latest release on Doll Records. Sawyer's style of playing is complex yet tastefully restrained and nuanced, reminiscent of guitar legends Jim Hall and Wes Montgomery. By doing so, he allows the song itself to shine as an artistic work, rather than using the song merely as a vehicle to display his prowess on the guitar. On Dreamers, Sawyer and his eclectic mix of side musicians explore genres beyond jazz with a collection of originals and covers (including songs by Bob Dylan, Nick Drake, and Irving Berlin} that resonate with a blues-tinged moxie apparently drawn from his surroundings and the rich music history embedded in his home- base of North Carolina.

IThe disc begins with "Booshki" (named for Sawyer's dog), featuring some wonderful improvisation by saxophonist Dave Finucane—Sawyer quickly establishes a pattern of deftly holding back while his fellow musicians step into the spotlight with a solo or vocal, and then stepping back into the spotlight at just the right time with a well- crafted solo or to transition the piece in another direction. Finucane is featured prominently on Dreamers and several other tracks, as are Ron Brendle on acoustic bass and Brian Sullivan on drums- -these musicians add a warm dimension to Sawyer's musical vision throughout the disc in songs such as "Gotta Lotta" and "Copperhead Stew."

A refreshingly compelling segment of the disc is a 2-song suite dedicated to a friend of Sawyer's from his days as a fledgling guitarist based in Greensboro. The suite begins with "Dakota," which combines a haunting guitar sound with a wonderful and heartfelt spoken-word poem delivered by Bruce Piephoff. "Dakota" perfectly sets up the second track of the suite, "Joe Dunn," an instrumental piece with a swampy blues vibe that really shows off Sawyer's guitar chops and also includes a captivating bass solo by Brendle.

Three tracks on the disc—"Dreamer," "River Man," and "Not Dark Yet" feature Kate McGarry as vocalist. She adds a pleasing dimension to the musical soundscapes painted by Sawyer, and establishes herself as a featured artist in her own right. In "Dreamer," her wordless vocal provides an ethereal quality in her interplay with Finucane's saxophone.

Sawyer proves himself to a versatile and cutting-edge guitarist throughout "Dreamers," and maintains a continuity of sound that embraces jazz and is still true to his musical roots.

Starting with the Beatles when I was 9, my musical journey has taken many roads and my tastes are varied and unpredictable.