By EYAL HAREUVENI
November 26, 2013
Sign in to view read count 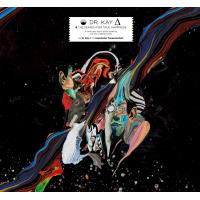 Who could guess that about twenty years after the spirit of Sun Ra left this planet and went to higher spheres what will transpire in the chilly winds of Oslo, Norway. But anyone who followed even remotely the unbelievable life of Sun Ra already knows that stranger things have happened.

The young heir of the cosmic thinker is Dr. Kay, also known as Dr. Ganesha Kay (and to us, common earthlings, as Arthur Kay Piene), a peacenik, spiritual traveler, galactic thinker, a musician with a great liking to vintage electronic keyboards and a man with a great mission. Dr. Kay and his Interstellar Tone Scientists promise to take us into an astral journey (arranged as a 70-minutes radio play) into space, time, our deepest feelings and thoughts and and to enlighten us what is true happiness. This journey also promises to illuminate us with an answer to the disturbing question, what is the true color of understanding? It rings real hard the chimes of peace and tempts us into magical, hypnotic dances with the greater powers of the universe.

Dr. Kay and the devoted gang of Tone Scientists are all members of some of the young and most promising bands in the vibrant Oslo scene: Mopti, Pixel, Bergljot and even the relatively older The Source. All well-versed in the legacy of the ecstatic, spiritual free jazz of the schools of Sun Ra and Pharoah Sanders that erupted in sixties. Music that has unifying and healing powers, based on infectious mantras and mesmerizing grooves. For the theatrical and choreographed performances of the tone Scientists—in the Nattjazz festival in Bergen, the Blow Out and Miniøya festivals in Oslo—they were dressed in their colorful alien costumes, suggesting universal freedom and equality for all people, just like the musicians of the Sun Ra Arkestra.

In this play the already mythic Dr. Kay, a shaman who mastered the language of the stars, a frequent traveler through the dimensions of time and space, a cosmic mogul that no one knows where he comes from or how old he is, leads this visionary journey with his meditative singing and admonishing voice. This journey passes through the mysterious planet Utopia of the fierce warriors and dancers, the fine establishment the Cotton Club in New York (where he is advised to get a keyboard player for his band), the halls of the Hindu elephant-headed god Ganesha (known for his powers to remove all obstacles) , the enigmatic Temple of the Earth Mother and even the streets of Vienna.

There are a few segments in this journey that suggest Dr. Kay also perfected his celestial wisdom after studying the radio play of British author Douglas Adams, later edited as the book The hitchhiker's Guide to the Galaxy, the amusing spiritual quests in the books of American author Tom Robbins or the beat poetry and fiction of Paul Bowles. The Tone Scientists' performances of the music, especially "Travelling Through The Zone," feature elements of an early, hard-swinging dance orchestra such as the one of Fletcher Henderson (Sun Ra was its bandleader and arranger in the mid-forties), now coupled with otherworldly keyboard sounds and irresistible funky grooves from the school of bands such as Parliament Funkadelic . Flute and alto saxophonist Kasper Værnes and trombonist Øyvind Brække serve as high priests of the Tone Scientists, assisting Dr. Kay in his quest to find the liberating groves that will point us to the true path to happiness.

The play is an uplifting, communal event. Dr. Kay and the Tone Scientist call for your support, you who cannot yet transmit the music of the stars directly to your minds. Brothers and sisters, join Dr. Kay in his quest, help him to tickle the ears of the earth with sacred joy. Summon your wandering spirits and join him in his noble mission, create together a new surge of true feeling amongst humans, find your magical powers and begin your ecstatic dance. True happiness, as well as a illuminating lesson on the profound spirituality of music, is guaranteed.

Intro; Sacred Hall; The Quest; Village Of Utiopia; The Great Statue; The Cotton Club; Traveling Through The Zone; The Spiritual Journey; Earth Mother; The Advice; Vienna; Abstrakter Expressionismus II; The Gathering; Future Music; Temple Dance; The Words Of The Riverbeast; Winds Of Ganesh; People Of The Earth.