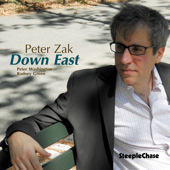 Block chords, swinging touch, trio setting, full-throated playing: this must be Red Garland. No, its New York City pianist and composer Peter Zak and his loquacious piano style, tasteful and full-bodied. Down East is Zak's sixth release for the Danish Steeplechase label. Zak's piano approach is easily stated, even and uniformly dense. His Ornette Coleman ("Invisible") reveals a connection with Thelonious Monk ("Gallop's Gallop") and a spiritual kinship with Clifford Brown ("Tiny Capers").

"Tiny Capers" was featured as the opener on Bill Carrothers' A Night At the Village Vanguard (Pirouet, 2011), and that pianist's expressionist approach contrasts well with Zak's intentional and exacting cover. Zak approaches the Brown compositions as a Bach Partita, with an intended precision that also swings, hardest during his solo section. Bassist Peter Washington keeps railroad-clock time and in doing so, always keeps Zak between the lines. Zak's two-fisted rhythmic approach propels the song along a comfortable predictable path to a really good listen.

Is That So?; Who Cares?; Sector 7; Gallop's Gallop; I didn't Know About You; Tiny Capers; Dreamsville; Invisible; Love Thy Neighbor; He Said/She Said; Down East.