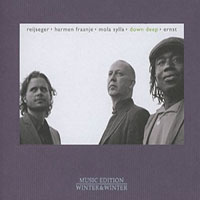 As one of its first signings, Ernst Reijseger has amassed a sizable discography with Winter & Winter. Werner Herzog—with whom Reijseger has also shared a lengthy relationship, scoring seven of the German film director's films since 2000's Ajax: Hark the Herald Angels Sing—has aptly described the Dutch cellist as capable of anything, furthermore suggesting that he could "play the American Civil war on his cello." Whether or not that's true remains to be seen, but clearly Herzog sees Reijseger as an artist capable of creating music that both augments and enhances the narratives of his films while, at the same time, standing alone as distinct and separate entities unto themselves.

Reijseger has also shared a lengthy partnership with Senegalese-born/Amsterdam-based Mola Sylla, a percussionist and vocalist whose combination of innocence and sophistication has graced nearly half a dozen of the cellist's recordings, including Down Deep. Emerging, in just a few short years, as one of The Netherlands' most noteworthy young pianists—through his own projects and trumpeter Eric Vloeimans' Fugimundi trio—Harmen Fraanje is also featured. It was the pianist who, in fact, approached Reijseger and Sylla six years ago and, while they've continued to work together ever since, Down Deep is their first recording strictly as a trio, and first non-film score, following Reijseger's 2011 soundtrack for Herzog's Cave of Forgotten Dreams.

Splitting the writing duties almost equally—three from Reijseger, two each from Sylla and Fraanje, plus two externally sourced pieces—Deep Down opens with the cellist's melancholic "Elena," one of seven tracks to also feature Sylla's Senegalese lyrics. Just as it was during the trio's showcase set at the 2012 Dutch Jazz & World Meeting, Sylla seems, at times, to be more about spoken word, elsewhere singing wordlessly and, in yet other instances, soaring with a primal kind of primitivism similar yet different to Norwegian trumpeter Per Jorgensen's work in keyboardist Jon Balke's Magnetic North Orchestra. Fraanje, over Reijseger's spare accompaniment, both integrates with the trio's voice and solos with a combination of gentle sensitivity, grander drama and unfettered freedom.

And that's only one tune. Sylla's xalam (a traditional West African stringed instrument) drives his own folkloric "M'br," but while Fraanje and Reijseger respect its humbler origins, they also take it to places Sylla might never have imagined as the pianist's plays over the compelling combination of Sylla's strumming and Reijseger's pizzicato. Sylla's kongoma—resembling a m'bira (thumb piano), but placed on a surface also capable of hand-driven percussion, provides the pulse for Fraanje's darker "Shaped by the Tide," with Reijseger alternating between near-bass range pizzicato and arco support for Fraanje on his five-string cello, and his own soaring, lyrical improvisations.

Deceptive in its blend of folkloric naiveté, structural sophistication and improvisational élan, Deep Down truly sounds like no other recording, as romantic classicism intersects with African culture and jazz-centric improvisation. Dynamic and dramatic, while almost—almost always gentle and elegant, it's the long overdue debut from an impressive trio that has fashioned its own language, one that may not be immediately understood, but still, one that is absolutely and unequivocally felt.