By Edward Blanco
March 7, 2015
Sign in to view read count 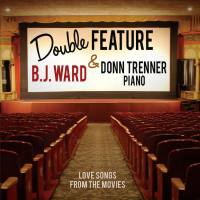 Actress, film animator, narrator and prolific singer, B.J. Ward reunites with pianist Donn Trenner an old musical partner, to record their second album together forty years after their first collaboration. The film-themed Double Feature takes a trip down memory lane offering eleven love songs from old movies and one original. Ward and Trenner are no strangers to each other as they actually use to be married, parted ways and have been the best of friends ever since. The duo released their first album Vocal-Ease (Catfish, 1974) after a date with a Netherlands large ensemble, carved out separate careers and now come together for a marvelous musical tribute to music from Hollywood.

Pianist Trenner is one of the original bebop artist of the jazz world having performed with such icons as Charlie Parker, Charles Mingus, Stan Getz and Ben Webster among others. He forged a career as an arranger, conductor and band leader who currently leads The Hartford Jazz Orchestra. An important part of the time in the business, has been spent as an accompanist to many vocalist from Nancy Wilson to Lena Horne in addition to serving as Ann Margret's Musical Director for eighteen years. Accordingly, a musical duet of piano and voice, as is so elegantly crafted here, is something Trenner and Ward are perfectly suited for as evidenced by the beautiful music found on this album.

From the movie "I'll Take Romance," the 1937 song penned by Ben Oakland and Oscar Hammerstein, starts the music rolling with Ward snapping her fingers as she introduces the love song taken away by Trenner's delicate piano keys setting the template for many of the pieces yet to come. Glenn Miller's familiar "Moonlight Serenade," from The Glenn Miller Story, comes across as a humbling tribute to the late band leader. The music swings a bit on the peppery 1946 Duke Ellington classic "Tulip or Turnip" where the silky vocals of Ward reaches as the pianist demonstrates some of his bebop pedigree on the piano.

Although the repertoire reprises songs from the movies, Trenner's original 1964 composition "It Happens," never before recorded, graces the album with the pianist taking his turn on an absolutely gorgeous solo while the singer caresses the lyrics. From the film, The Fleet's In, the pair take on one of the most oft-recorded songs around in "I Remember You," delivering one of the most memorable renditions of the standard.

The distinctive duo close out the session with two more light ballads with the haunting "Whistling Away the Dark," from the movie Darling Lili and finalize the set on the light-hearted "Tomorrow Is Another Day" from the film A Day At The Races. The aptly-titled Double Feature highlights the vocal talents of a wonderful singer and the prowess of a gifted and seasoned master of the piano affirming that B.J. Ward and Don Trenner, are indeed the real double features of this project. The music of the movies never sounded so enchanting thanks to Ward and Trenner.

I'll Take Romance; Moonlight Serenade; Drifting; Tulip Or Turnip; Do You Know Why; I Love Being Here With You; It Happens; I Remember You; Young and Foolish; Rosemary's Baby; Whistling Away The Dark; Tomorrow Is Another Day.

About B. J. Ward & Donn Trenner