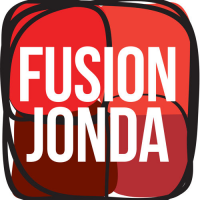 Ever since the Spanish first crossed the Atlantic Ocean in search of India, gold and spices, mistakenly landing upon the shores of Caribbean islands, there has been an ongoing process of acculturation. Puerto Rico, having been under the Spanish flag and influence for hundreds of years, absorbed Spanish music as well as the rhythms brought over from Africa, to the point that this amalgamation has come to identify the music of the island. So it comes as no surprise that the ensemble Fusion Jonda , with their original blend of flamenco coupled with bomba, guaguancó and hip hop, has struck a nerve with the Puerto Rican audience. They are dynamic stage entertainers who are able to recreate the music in a live setting with a high standard of professionalism.

With the opening strains of "Soniquete Boricua," there is a defined sense of jaleo which is carried throughout the record. Devoid of any melodic instruments on this track, it is the classic hand clapping, known as palmas, which sets the tempo upon which the vocals of Juan Luis Romero are carried. Romero is the guitarist, vocalist and producer of Fusion Jonda, and is the driving force of the band.

"Chocamelo," is a frenetic combination of vocal melody and driving congas interjected with hip hop, augmented with a full blown horn section. The influence of the Gipsy Kings is evident on their cover of this groups "Djobi Djoba," where Romero is accompanied by the charming voice of Nayka Vallejo. "Espacio," is an emotional tale of lost love, where Romero shows his mastery of the afillá vocal technique.

The traditional barriles de bomba, are brought to the forefront in "Rumba Con Bomba," and given a modern urban twist with the rap vocal by Javier Velázquez. Then it's back to Spain with the paso doble rendition of "Dame La Libertad." The highlight track of "Que No Que No," is an island flavored buleria delivered with a distinct panache that when performed live is a fervent crowd pleaser.

This energetic offering by Fusion Jonda is indicative of the musical collaborations which are appearing on a global scale in world music, and has caught hold on in the Caribbean as well. On top of excellent musician skills, this type of recording calls for intense focus and attention in execution, and Fusion Jonda accomplished that. It is the perfect example of old world vibe swathed with a new attitude yielding an exuberant production.