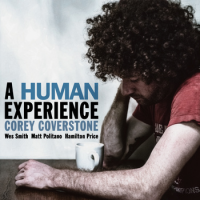 Los Angeles based drummer Corey Coverstone's debut release as a leader, A Human Experience (Self Produced 2014), is a solid exploration of some familiar and not so familiar jazz standards by a band with a lot of chemistry. Coverstone, originally from Portland, is now a familiar face in the LA jazz scene and is playing around town with his band regularly. Coverstone enlisted the help of some of LA's finest musicians for this record; joining him are Wes Smith (Stevie Wonder, Justin Timberlake) on saxophone, Matt Politano (Walter Smith III, Sara Gazarek) on piano and Hamilton Price (Billy Childs, Anthony Wilson) on bass. The quartet plays swingin,' no frills arrangements of well known tunes like "Freedom Jazz Dance" and less known compositions like "Twilight Mist." Coverstone's playing drives the rhythm section and keeps the energy high.

A highlight of the album is the band's inspired rendition of Wayne Shorter's "Black Nile," where saxophonist Smith shines as a soloist and Coverstone shows off his chops, which are always used in good taste, and his great tone. Another standout track is the previously mentioned "Twilight Mist." The beautiful ballad features Politano's sensitive and subtle comping, as well as a beautiful solo by the pianist, and Coverstone's impressive brushwork. Closing the album is the classic "Blue in Green," which is dedicated (as is the album) to a former teacher, bassist Jamie Faunt, who passed away in 2013.

Short and sweet, the unique song choice and program of the album make it interesting, as does the fiery playing from everyone involved. Any fans of straight ahead swing will definitely want to check this one out.